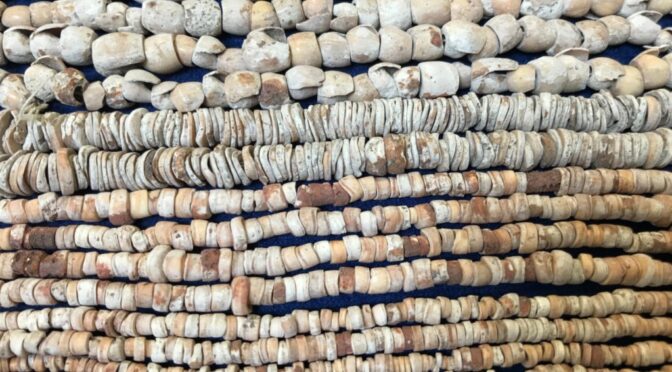 The Santa Barbara Museum of Natural History turned over to the Santa Ynez Band of Chumash Indians the partial remains of about 1,000 Chumash and pre-Chumash people who had lived throughout the South Coast over a time span of 13,000 years.

In addition, UCSB turned over the human remains of 400 individuals and nearly 4,000 funerary objects. Most of these were unearthed when the UCSB campus was first being built in 1950 and date back as far as 4,000 years.

This historic transfer was done in accordance with the federal Native American Graves Protection and Repatriation Act, a law requiring museums and institutions of higher learning to turn over such remains and artefacts to federally recognized Native American representatives upon request.

In a carefully crafted press release issued by both the Santa Ynez Band and the Museum of Natural History, Tribal Chairman Kenny Kahn stated, “These items have come home to our tribe, and it allows us to do the important work of repatriation and reburial.

We will continue to have a close working relationship with the Santa Barbara Museum of Natural History and consider it to be a collaborative partner in the community.”

Museum director Luke Swetland added, “The Museum has been honoured to care for this important cultural heritage for many years and finds it deeply satisfying that we can transfer custody back to the Chumash Community.”

The Museum’s Chumash and pre-Chumash collection, the most extensive in the world, included remains from 1,011 individuals and 36,943 associated funerary objects. With one notable exception, the bones in the museum collection date as far back as 7,000 BCE.

The exception is three femur bones found protruding from a creek channel on Santa Rosa Island in 1959 by Phil Orr, the museum’s then-director of anthropology.

Scientific analysis has proved those bones to be 13,000 years old, a discovery that makes them the oldest human remains found anywhere in North America.

The discovery adds considerable credence to a theory of human migration known as the “Kelp Superhighway Hypothesis,” which suggests that the first humans arrived in North America not by land, as has long been proposed, but by sea, following the coastline of the Pacific Rim of northeastern Asia and Beringia down to South America, where plentiful kelp beds provided sufficient food for the early explorers.

Most of the remains and artefacts transferred to the tribe show the technology and art developed by Chumash and pre-Chumash residents of the region, how they adorned themselves, what tools they had at their disposal, and what materials they used, and how they buried their dead.

The collection of Native American remains and artefacts kept by museums and institutions of higher learning has long been a highly charged issue.

The Museum of Natural History first began amassing its collection in 1922 under the direction of museum anthropologists David Banks Rogers and John Peabody Harrington, who worked closely with Chumash people in the region recording their language and culture.

By the 1970s, the presence of Native American monitors emerged as a force for cultural preservation at any major construction sites located near what had once been tribal land.

In 1989, the museum created the California Indian Advisory Council, which included representatives from as many of the local Chumash bands as possible, not just those representing the Santa Ynez Band.

For the past 40 years, the museum ​— ​under the direction of John Johnson, the museum’s most recent anthropologist ​— ​collaborated with many academic researchers to study the museum’s collections consistent with the best practices established by the Society for American Archeology and the American Alliance of Museums.

In addition, Johnson has engaged closely with many Chumash individuals to study their cultural heritage, he said, “as a way to enlarge their understanding of themselves and their community.”