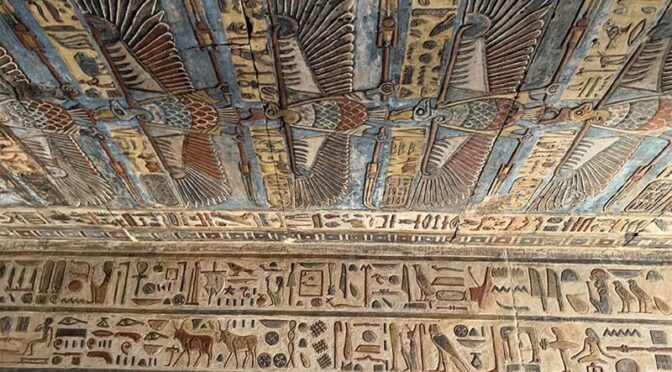 The Egyptian-German archaeological mission has uncovered original reliefs and engravings on the walls and ceilings of the Temple of Esna in Luxor, Upper Egypt during ongoing restoration work.

“This is the first time to find this relief,” said Mostafa Waziri, secretary-general of the Supreme Council of Antiquities. “It was not seen or mentioned in the works published by the French Egyptologist Serge Soniron, who documented the temple’s reliefs in 1963 and 1975, Waziri added.

Hisham El-Leithy, the head of the Central Department for Egyptian Documentation Centre and head of the mission from the Egyptian side, explained that the uncovered reliefs and engravings at the Esna temple were hidden beneath dust and accumulation of salts and birds deposits over the last 2000 years.

This discovery made it important for us to begin a restoration project, funded by the American Research Centre in Cairo, to protect the temple and uncover its decorations, El-Leithy stressed.

Meanwhile, the mission also found a Roman engraving in red ink on the western side of the temple dating from the era of the Roman Emperor Domitian, 81-96 CE, who might have completed the construction of the temple.

More studies will be carried out on these engraving to show more details.

During the 19th and 20th centuries, the Temple of Esna suffered from urban encroachment, which limited access to the site only through one of the houses built around it.

During the reign of Mohamed Ali Pasha (1805-1840 AD), the temple is reported to have been used as a storage facility for the cotton crop.