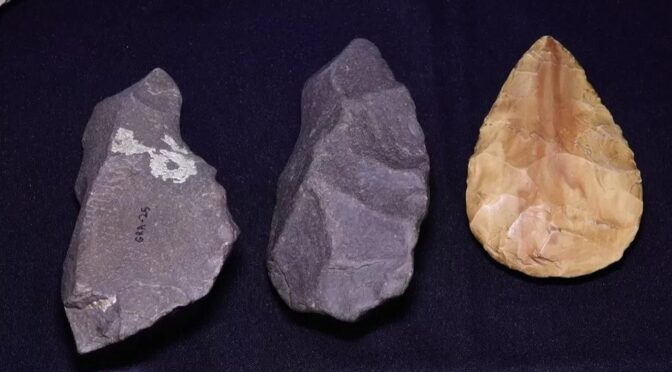 Over the years rock carvings of a previously unknown civilisation have been found in India’s western state of Maharashtra. Now, a cave in the same region is promising to shed more light on the creators of these prehistoric artworks and their lives. The BBC Marathi’s Mayuresh Konnur reports.

The cave, located around 10km (six miles) away from Koloshi village in the Konkan region of western Maharashtra, was discovered by a group of researchers last year. Excavations earlier this year revealed several stone tools in the cave that date back tens of thousands of years.

“Nowhere in the world can we find rock art of this kind,” says Dr Tejas Garge, who heads Maharashtra’s archaeology department. Archaeologists believe these artefacts can help us find out more about the way our ancestors lived.

The cave, which is situated in a secluded forest in Sindhudurg, was discovered by researchers who were studying rock carvings in nearby areas.

Excavation work was conducted in two rounds, during which archaeologists dug two trenches inside the cave. Several big and small stone tools dating back to the Mesolithic period – also called the middle stone age – have been found.

“The microliths, or the small stone tools, date back to around 10,000 years, whereas the larger tools could be around 20,000 years old,” says Rutivij Apte, who has been researching the Konkan petroglyphs and was part of the excavation team.

Dr Parth Chauhan, an archaeologist, says chemical processes are used to analyse any residue that might be present on the edges of the artefacts. This can help determine what the object was used for.

“It will take a couple of months to find out the exact time period these stone tools belong to. But right now, we can say that these artefacts are between 10,000 to 48,000 years old.”

Maharashtra’s laterite-rich Konkan plateau where this cave was discovered is also a treasure trove of prehistoric art. In the past explorers have discovered rock carvings of animals, birds, human figures and geometrical designs hidden under layers of soil in several villages here.

So far, 1700 petroglyphs – or rock carvings – have been found at 132 locations in 76 villages in Sindhudurg and the nearby Ratnagiri district.

Saili Palande Datar, a Pune-based art historian and writer, says these carvings offer great insights into the life and habits of prehistoric man.

She gives the example of an iconic rock carving of a human figure found near Barsu village in the Ratnagiri district.

The carving is embossed on a rock and seems to be of a male figure who is holding what appears to be tigers and other wild animals in both hands.

“There is an amazing sense of symmetry in this carving, which points to a high level of skill. The picture also depicts the relationship man shared with animals,” Ms Datar says.

He says that seals of the Harappan civilisation – one of the oldest civilisations in human history that flourished in the Indian subcontinent – also depict the close relationship man shared with animals.

“The seals have images of large animals like tigers and buffaloes and of man hunting animals,” she says.

Experts say that mysteries around these prehistoric rock carvings are far from being solved, but a Unesco tag – natural and cultural landmarks from around the world are singled out for their “outstanding universal value” to humanity – can help preserve them for generations.

Eight rock carving sites in the Konkan region are already a part of Unesco’s tentative list of World Heritage sites, which is the first step towards getting the tag for any culturally-significant site.