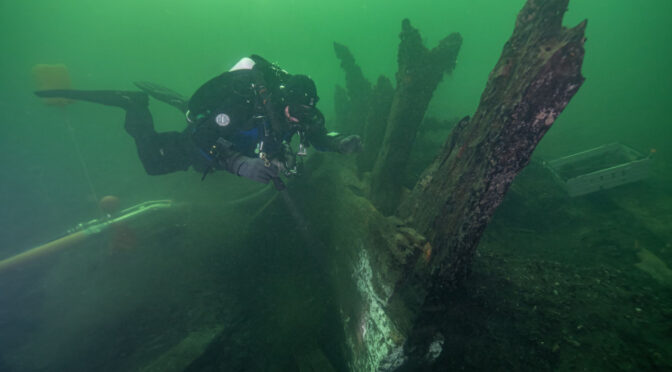 New excavations have coaxed more secrets from Gribshunden, the flagship of the Danish-Norwegian King Hans which mysteriously sank in 1495 off the coast of Ronneby, Sweden.

The wreck is internationally significant as the world’s best-preserved ship from the Age of Exploration – a proxy for the vessels of Christopher Columbus and Vasco da Gama.

During August and September, a scientific team from Lund University, Blekinge Museum, and the Danish Viking Ship Museum excavated portions of the wreck.

Recovered artefacts include artillery, handguns, and major components of the steering gear and stern castle.  3D models of key structural components have allowed the first digital reconstructions of the ship.

“No other ship from the time of exploration has survived this intact,” says scientific leader Brendan Foley from Lund University. “Gribshunden delivers new insights into those voyages. We now understand the actual size and layout of those ships that changed the world. And more, we glimpse how this vessel operated as King Hans’ floating castle.”

This is the section of the ship the king and noblemen likely occupied, in addition to gunners and steersmen. Comparisons of this tightly confined section with medieval castles on land suggest that hierarchical divisions of space must have been relaxed while the king was at sea.

In the bow of the ship, 3D models of the stem post and hawse pieces (through which the anchor lines passed) provide clues about the forecastle’s functions of crew accommodation, ship handling, and fortification. Oddly, no artillery has been found there. Was it salvaged after 1495, or were the ship’s guns mounted only in the rear half of the vessel?

King Hans’ ambition was to unify the entire Nordic region under his crown. In this pursuit, Gribshunden was essentially for new technology. The vessel was among the first warships built specifically to carry artillery. Hans personally voyaged on the ship throughout his realm and beyond: to Norway, Gotland, and Sweden.

The ship was his administrative centre for months at a time, while simultaneously displaying regal power at each port of call. Often the ship was the centre of a squadron or fleet: in 1486, more than 600 Danish noblemen and senior clergy on dozens of ships accompanied Hans to Norway, where he established a new mint.

On Gribshunden’s final voyage, it led another squadron toward a political summit in Kalmar, Sweden, where Hans expected to be elected king of Sweden and fulfil his vision of a Scandinavian union. The ship was loaded with prestigious goods to impress the Swedish council, and many of those items await archaeological discovery.

“Another big puzzle remains: what really caused Gribshunden to sink?”, Foley asks. “Medieval documents state there was fire and an explosion, but we have not seen any signs of that. Maybe next year’s excavation will provide evidence of the catastrophe”, he concludes.