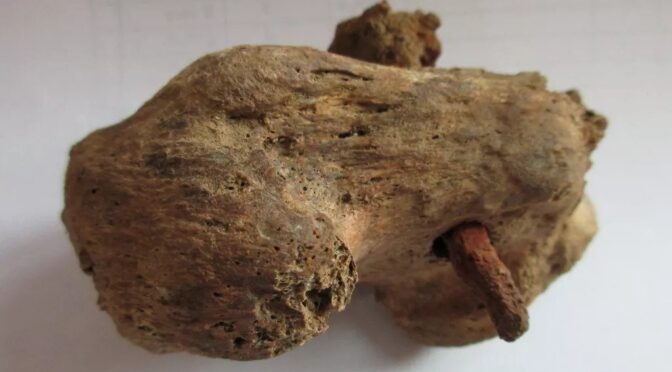 Archaeologists in Cambridgeshire, U.K., have discovered what may be the best-preserved physical evidence of crucifixion—a 1,900-year-old skeleton with a two-inch iron nail driven through his heel.

Originally unearthed by a team from Albion Archaeology during excavations in the village of Fenstanton in 2017, the remains date to between A.D. 130 to 337.

The findings from the dig are published in the new issue of British Archaeology magazine.

“This is an extraordinarily important find because it is only the second discovery of a crucifixion victim from Roman times,” John Granger Cook, a professor at LaGrange College in Georgia and the author of Crucifixion in the Mediterranean World, told the Independent.

He estimates that the Romans used crucifixion, which kills its victims through asphyxiation, to execute only about 100,000 to 150,000 people before Emperor Constantine outlawed the practice in A.D. 337 after converting to Christianity.

As a particularly drawn-out and gruesome means of capital punishment, crucifixion is believed to have been reserved for enslaved people and enemies of the state.

Most victims were likely secured by rope, rather than nails, and would probably not have received formal burials, making it difficult to find physical evidence of their cause of death.

The deceased found in Fenstanton would have been a 25-to-35-year-old man measuring about 5 foot 7, reports the Guardian. His foot was nailed down to keep him from writhing around during his last moments, while existing injuries to his legs suggest he was kept enslaved and shackled prior to his death.

He was buried with a timber structure, perhaps the bier on which he was executed.

Only four other examples of the remains of possible crucifixion victims, including ones from Gavello, Italy, and Mendes, Egypt, have been identified; this skeleton is the first to be found in northern Europe.

Construction workers in Jerusalem found the only other one featuring a nail in 1968, but the body was not intact, and thus is not fully accepted as firm evidence of crucifixion in archaeological circles.

“It’s essentially the first time that we’ve found physical evidence for this practice of crucifixion during an archaeological excavation,” dig leader David Ingham, of Albion Archaeology, told the Daily Mail.

“You just don’t find this. We have written evidence, but we almost never find physical evidence.”

Excavations in Fenstanton have turned up 48 ancient graves, as well as ceramics and and a horse-shaped copper alloy brooch decorated with enamel.

The village lies along an ancient Roman road called the Via Devana, between Cambridge and Godmanchester.