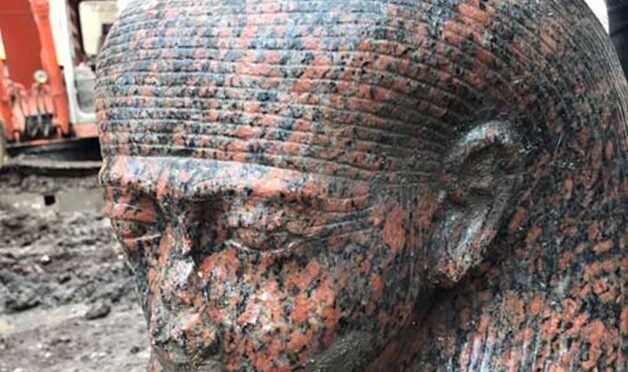 On Wednesday, December 11, an Egyptian archeological expedition from the Ministry of Antiquities revealed an unusual royal bust of King Ramses II made of red granite in a private area in the village of Mit Rahina, Giza.

The bust that has recently been discovered is emblazoned with the “Ka,” a symbol of strength, life force and spirit.

The King Ramses II bust is sculptured with red granite and shows Ramses II carrying the symbol of “Ka.” The bust has a length of 105 cm, a width of 55, and a thickness of 45 cm.

After the landowner was caught carrying out unlawfully excavating on his land, the mission team discovered this rare bust during excavations on private land in Giza.

The Secretary-General of the Supreme Council of Antiquities, Mostafa Waziri, announced that the uncovered King Ramses II bust is one of a kind because the only similar bust is one carved in wood and belongs to 13th Dynasty King Hor Awibre, which is now on display at the Egyptian Museum in Cairo.

The mission has also discovered a group of huge red granite and limestone blocks engraved with scenes showing Ramses II during the Heb-Sed religious ritual, which indicates that these blocks could belong to a great temple dedicated to the worship of the deity Ptah.

The bust and the blocks have been transferred to Mit Rahina open-air museum for restoration, and excavations will continue at the site.

One of the main achievements of King Ramses II is building Abu Simbel temple to impress Egypt’s southern neighbors, and also to reinforce the status of the Egyptian religion in the area.

Abu Simbel was one of six rock temples erected in Nubia during the ruling period of Ramses II and its construction took 20 years from 1264 BC to 1244 BC.

Abu Simbel is made up of two temples. The smaller one was built for Queen Nefertari and has two statues of her and four pharaohs; each about 33 feet (10 meters) in height.

According to many scholars, this great temple was created to celebrate the victory of Ramses II over the Hittites at the Battle of Qadesh in 1274 BC.

This means that the temple was situated on the border of the conquered lands of Nubia after many military campaigns were carried out by the Pharaoh against Nubia.