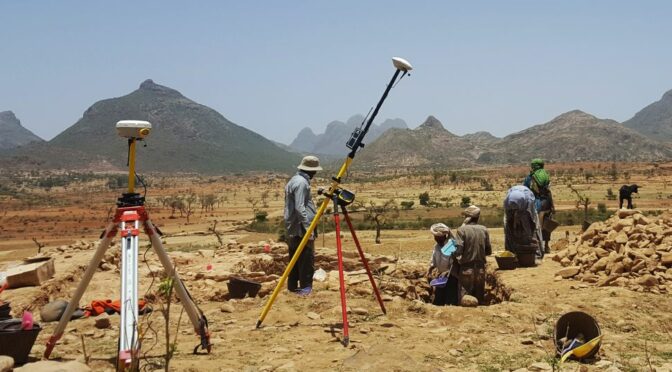 Recently, in an area of Ethiopia that once was home to the Aksumite Empire, Archeologists discovered the oldest known Christian Church in Subsaharan Africa.

Smithsonian magazine reported that the existence of an early basilica, built-in 313 around the time when Constantine legalized the Christian community, leads scholars to believe that this time the faith spreads into Ethiopia. It would become the first Christian kingdom in Aksum Africa.

I understand that this finding is ‘ the earliest physical evidence for a church in Ethiopia, [as well as all of sub-Saharan Africa,]” Aaron Butts, a professor of Semitic and Egyptian languages at Catholic University in Washington, told Smithsonian. Butts was not involved with the excavation.

In Beta Samati, close the modern border with Eritrea, the basilica was found at 70 miles southwest of the Red Sea. The name of the town means “house of the audience” in the local Tigrinya language.

The area is “home to temples built in a southern Arabian style dating back many centuries before the rise of Aksum, a clear sign of ancient ties to the Arabian Peninsula,” the magazine said.

“The temples reflect the influence of Sabaeans, who dominated the lucrative incense trade and whose power reached across the Red Sea in that era.”

The excavators’ biggest discovery was a massive building 60 feet long and 40 feet wide resembling the ancient Roman style of a basilica.

Developed by the Romans for administrative purposes, the basilica was adopted by Christians at the time of Constantine for their places of worship.

They also uncovered a stone pendant carved with a cross and incised with the ancient Ethiopic word “venerable,” as well as incense burners. Near the eastern basilica wall, the team came across an inscription asking “for Christ [to be] favorable to us.”

According to Ethiopian tradition, Christianity first came to the Aksum Empire in the 4th century,  when a Greek-speaking missionary named Frumentius converted King Ezana, Smithsonian said. “Butts, however, doubts the historical reliability of this account, and scholars have disagreed over when and how the new religion reached distant Ethiopia.”

“This is what makes the discovery of this basilica so important,” he adds. “It is reliable evidence for a Christian presence slightly northeast of Aksum at a very early date.”

While the story of Frumentius may be apocryphal, other finds at the site underline how the spread of Christianity was intertwined with the machinations of commerce.

Stamp seals and tokens used for economic transactions uncovered by the archaeologists point to the cosmopolitan nature of the settlement.

A glass bead from the eastern Mediterranean and large amounts of pottery from Aqaba, in today’s Jordan, attest to long-distance trading.

Woldekiros added that the discoveries show that “long-distance trade routes played a significant role in the introduction of Christianity in Ethiopia.”