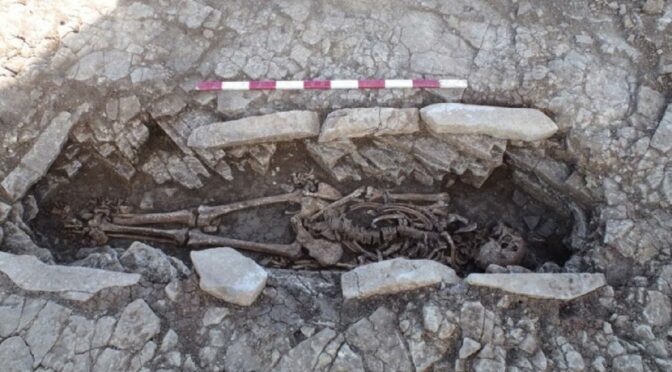 Remains of 50 skeletons from the dawn of Britain’s Roman occupation 2,000 years ago unearthed by construction workers building a new school in Somerset

Building workers in the UK have unearthed a large  Roman-era cemetery. The burials are of an unusual type, showing spectacular changes in the funerary customs of locals in the 1st century AD.

This cemetery helps historians to understand better understand a key period in British history, namely the transition from a Celtic to Roman culture and society

When they worked on a new building that would replace the old one, the workers unearthed the Roman cemetery. It was found near Somerton, Somerset in Southern England. The relevant authorities were notified as required by law and work on the new building was paused.

The South West Heritage Trust then began to investigate the site and what they found was astonishing. Archaeologists conducted the most comprehensive excavation of a Roman burial site ever in the region. During the dig, they used drones and other innovative technology.

Steve Membery, of the Heritage Trust, told BBC that “this site is a significant discovery.” Just over fifty burials were found, and they are dated to the 1 st century AD.

This is the time when Rome conquered the Celtic tribes that had previously inhabited the area. It was an era of profound political, social and cultural changes.

The nature of the graves was something that astonished the archaeologists. Most of the graves  “were dug into the bedrock and lined with stone curbs to create a coffin structure,” reports the BBC. These slabs were also used in the construction of roofs in the early Roman period.

The BBC reports that “in one particularly unusual grave, slabs were used to create a tent-like structure above the person who was buried.” This is similar to other burials in Western Europe, but it’s rare in England and this custom was possibly brought to the area by Romans.

The nature of the graves indicates that the early influence of Roman funerary customs. In the older graves, from before the invasion, the dead were simply compressed into a burial place.

After the conquest, the graves were built with more care and the bodies laid flat. Findings from the grave of one woman suggest that her head was propped on a pillow when she was buried.

Interestingly, small nails were found in the later graves, which seems to show that people were buried wearing hob-nailed boots. Membery told The Guardian that “the individuals were evidently of some status.” Additionally, some grave goods were found, including brooches, coins, and pottery.

One intact pot was found to have the remains of a chicken, who was possibly sacrificed during a burial ceremony. These finds show the influence of Rome on the local population, and how quickly it adopted the customs of the invaders.

DNA testing is being conducted on the bodies to determine their origin. It is believed that they are the remains of Romano-Britons. They had probably been Romanized and had adopted many of the beliefs and practices of the new ruling class.  They possibly came from a nearby villa. It should be noted that the outbuildings of this villa have been found but not the actual building.

However, archaeologists are reluctant to positively state the remains belong to Celts who had adopted the culture of Rome.

Recently some Roman-era graves were found that hold the remains of those with Asian ancestry. Membery is quoted by The BBC as saying that this “find means archaeologists in Somerset are hesitant to make assumptions about the possible origins of people whose remains are unearthed.”

The find is changing the history of the area. Local public representative Cllr Faye Purbrick, stated: “The findings are both exciting and extraordinary, providing us with valuable insight into Somerset’s early history.” Moreover, they are showing how quickly and profoundly the Romans changed the local people and their beliefs.

Based on the changing burial customs, the Romanization of the ancient Celtic people occurred very quickly. Further investigations are underway in Somerton and a summary of the findings will be published in an academic journal in the future.