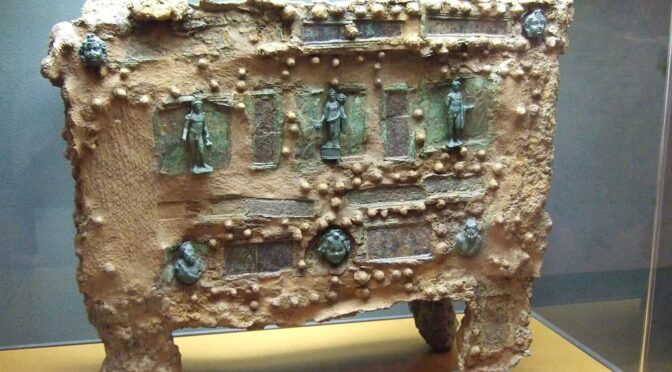 A rare strongbox from the 4th century A.D. has been discovered in the Casa del Mitreo, a Roman villa in west-central Spain.

The area Ferrata, a wooden chest armed with bronze cladding and iron spikes, was used as a safe for valuables — coin, jewellery, textiles, important documents — in Roman homes and businesses. Because they are mostly made of wood, only four others are known to survive.

Three of the extant examples were preserved under the extraordinary conditions of the eruption of Vesuvius in 79 A.D. The only other arca Ferrata found in Spain was discovered in Tarazona, Aragon, northeastern Spain.

The Domus was dubbed Casa del Mitreo because a sanctuary believed to be Mithraeum was discovered nearby. The villa was built in the late 1st, early 2nd century and was remodelled and expanded several times over the next centuries. It was located outside the ancient Roman city Emerita Augusta (modern-day Mérida).

“It is unclear what the owner did for a living. But it is clear that it was probably a wealthy family because the surface of the house is around 3,386 square meters (36,447 square feet), with 15 rooms, including the bathrooms and the kitchen, as well as four other rooms,” said [Archaeologist Ana Maria Bejarano] Osario.

Osario said: “It is unclear what they did for a living, but it might be something related to commerce or business, and they could even have been using the four extra rooms themselves to sell their wares.”

The house also had two more rooms on the second floor, including the one that collapsed during the fire, the causes of which are unknown.

The remains of the arca Ferrata were first discovered in 1994 during excavations in a room of a building that had suffered a fire in the 4th century.

At the time, the condition of the exposed organic remains was precarious, so the team decided to leave it in situ and prevent further deterioration as much as possible.

It wasn’t until 2017 that a comprehensive conservation and consolidation project at the Casa del Mitreo tackled the burned room once more.

It was fully excavated and documented, as were the paintings and artefacts inside the room. It is misshapen from the effects of the fire which collapsed the roof onto the coffer and drove it into the ground. Today it measures 9.8 by 4.9 feet, but its original measurements are unknown.

Archaeologists consolidated the remains to keep the metal parts from oxidizing and the wood from decay.

It was removed intact and transferred to the Institute of Cultural Heritage of Spain (IPCE) of the Ministry of Culture and Sports where it will be studied, stabilized and restored for future display.