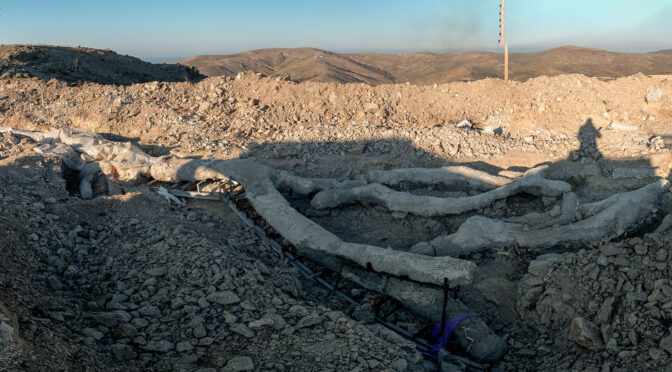 A petrified tree 62 feet high complete with branches, leaves and roots has been discovered on the Greek island of Lesbos. It was found during salvage excavations at the site of roadwork in western Lesbos.

While the island is famed for its vast petrified forest, a national park, monument and designated UNESCO Global Geopark, most of the trees are trunks, either upright with their roots intact or fallen.

Trees with branches are rare — the last one before this was found in 1995 — and a tree of this scale with branches has never been found before.

The trees were mineralized and preserved in a series of massive volcanic eruptions that struck the northern Aegean 17 to 20 million years ago. The trees on the western part of the island were covered by volcanic lava and ash.

Heavy rains turned the ash into fast-moving mudflows that blanketed the forest. The subtropical forest of pines, oaks and Sequoia-like giants, plus leaves, fruits and roots were fossilized.

The latest discovery was preserved almost to its last leaf thanks to a coating of fine-grained volcanic ash which coated the whole thing and kept it intact in one piece exactly where it fell in the eruption. It was not moved or dragged by the mudflows.

It simply toppled over where it stood, was covered by a thick layer of fine ash and gradually turned to stone. Underneath it was a bed of fruit leaves, also preserved and mineralized by the volcanic ash. Nearby the excavation team unearthed a spectacular cache of 150 petrified logs one on top of the other in a single pit.

The discovery of an entire tree lying on a bed of leaves was not only unprecedented but down to pure luck. “Constructors were about to asphalt that part of the highway when one of our technicians noticed a tiny branch.

The road work stopped, we starting excavating and quite quickly realised we had chanced upon an incredible find,” said [University of the Aegean geology professor Nikolas] Zouros. “It will now form part of the open-air museum we intend to create.”

Geologists around the world have described the find as a breakthrough.

“We have a case of extraordinary fossilisation in which a tree was preserved with its various parts intact. In the history of palaeontology, worldwide, it’s unique” said the Portuguese palaeontologist Artur Abreu Sá. “That it was buried by sediments expelled during a destructive volcanic eruption, and then found in situ, makes it even more unusual.”

Because the road will still be built over the find site, the tree will have to be moved. The staff of the Natural History Museum of the Petrified Forest have been working assiduously for the past few weeks to complete the excavation of the tree and preserve it.

A custom splint has been wrapped around the trunk and branches to support them and ensure the tree remains intact. A metal grate has been built to transport the tree to an area 100 feet away where a protective shelter is being constructed for its display.