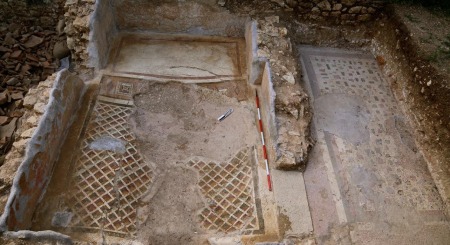 A Roman villa near Rossett was discovered – the first of its kind ever to be discovered in northeast Wales. The find, made by Wrexham Museum, the University of Chester and Archaeological Survey West, represents an exciting addition to our knowledge of the area during the Roman period.

With the partnership of local metal detectorists who found Roman material on the site, the site was uncovered, this sparked a remote sensing survey which revealed clear evidence of a buried structure.

The remains appear to be of a fairly typical form with a number of stone and tile buildings surrounding a central courtyard, the survey also suggested its association with a field system, a trackway and other related buildings and structures.

Fieldwalking at the site has yielded artefacts from the late 1st century to the early 4th century AD, suggesting that the villa was occupied for the majority of Roman rule in Britain.

The Roman army invaded Britain in AD 43 and quickly pushed northwards and westwards across the country. The fortress at Chester was established around AD 74 and with relative peace came the establishment of a network of towns and rural settlements.

Most villas were essentially farming establishments, although ranged from relatively simple in design to very grand with mosaic floors, bathhouses and underfloor heating systems.

The discovery of architectural fragments found during fieldwalking suggests that this villa may incorporate at least some of these grander features.

Dr Caroline Pudney, senior lecturer in Archaeology at the University of Chester, said: “This exciting discovery potentially alters our understanding of north east Wales in the wake of the Roman conquest.

“Previous interpretations suggest that most people in this area either lived in settlements associated with Roman military sites or in quite simple farmsteads that continued to utilise Iron Age roundhouse architectural forms. The identification of the villa now questions this narrative.”

Councillor Hugh Jones, lead member for people at Wrexham Council and the local Member for the Rossett ward, said: “This discovery is remarkable and just goes to underline the significant number of fantastic archaeological discoveries that have taken place in and around Rossett in recent years, whether it be Bronze Age such as the wonderful Burton Hoard or the Roman lead pig (or ingot) that is currently on display at the Museum.”

The museum and the university are now planning a programme of work to further investigate the site over the next few years subject to funding and appropriate permissions.

The work on the project to date has been funded by the Roman Research Trust and supported by Wrexham Museum and the University of Chester.