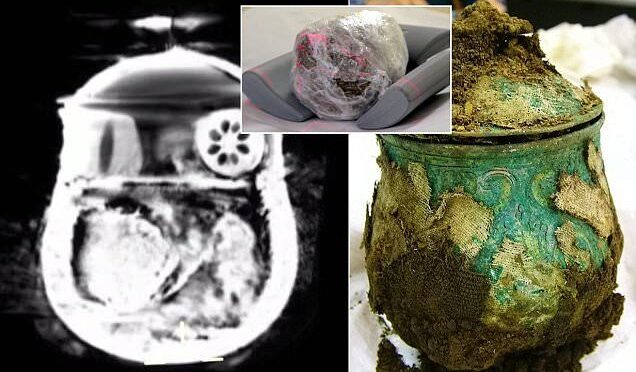 Since researchers conducted a CT scan of the old artefact, the mystery around the contents of a Viking pot has been resolved. Archaeologists had been unable to open the pot to see what was inside, but its weight suggested it was full of treasure.

After undergoing a series of scans, the 1,200-year-old pot was found to contain up to at least five silver brooches and an ornate bead. It was among more than 100 objects discovered by metal detectorist Derek McLennan.

Other items include solid gold jewellery, armbands, and silver ingots. The find was deemed one of the most significant Viking hoards ever discovered in the UK, but the pot’s contents were a mystery.

Experts were concerned about damaging the 9th-century Carolingian pot when attempting to see what was inside. But now, the CT scanner at Borders General Hospital, Scotland, has revealed the ornate box contains around 20 silver, gold, and ivory items.

Mr McLennan, a retired businessman, said the latest discovery was ‘beautiful and exciting’.

‘It brought it all back to me when I saw what was inside the pot,’ he continued. I was like a kid looking in the sweet shop window unable to touch anything being on the other side of the glass.

‘It’s a real mishmash of artifacts. Not everything comes across clear as there are different types of metal in there. There is hopefully something beautiful and exciting to look at when it comes out because [the owner] took the time to wrap these items.

‘I’m now waiting on the pot to be emptied, but I understand these things take time and it’s in the hands of the experts.’ A scan of the Carolingian pot was conducted by Dr. John Reid, a consultant radiographer at the BGH, who is also a keen amateur archaeologist.

He was approached by Richard Welander, head of collections with Historic Scotland, who was aware of the previous use of the hospital’s CT scanner for archaeological research. With the permission of hospital chief Calum Campbell, the pot was brought in for an evening scanning session.

‘This work takes place outwith normal hours and in no way impedes the important work we do for our human patients,’ said Dr. Reid. The scanner is both rapid and accurate, with the ability to produce 120 visual slices, and is accurate to within half a millimeter.’

Dr. Reid added: ‘The conservationists did not want to [grope] about and compromise this precious object. The discovery was made in early September by Mr. McLennan.  Fellow metal detectorists Reverend Dr. David Bartholomew, who is a Church of Scotland minister of a rural Galloway charge, and Mike Smith, the pastor of an Elim Pentecostal Church in Galloway were also in the vicinity at the time.

‘A short time later he ran over to us waving a silver arm-ring and shouting ‘Viking’! It was tremendously exciting, especially when we noticed the silver cross lying face-downwards.

‘It was poking out from under the pile of silver ingots and decorated arm-rings, with a finely wound silver chain still attached to it.

‘It was a heart-stopping moment when the local archaeologist turned it over to reveal rich decoration on the other side.’

The hoard falls under the Scots law of treasure trove and is currently in the care of the Treasure Trove Unit. The law states that a reward must be made to the finder, and the reward is judged equivalent to the market value of the items. The Church of Scotland General Trustees, as the landowners, have reached an agreement with Mr McLennan about an equitable sharing of any proceeds, which will eventually be awarded.

The location of the find is not being revealed.

The Scottish Government, Treasure Trove Unit, and Historic Scotland are all involved in ensuring the area is properly protected while the full historical significance of the site is established.