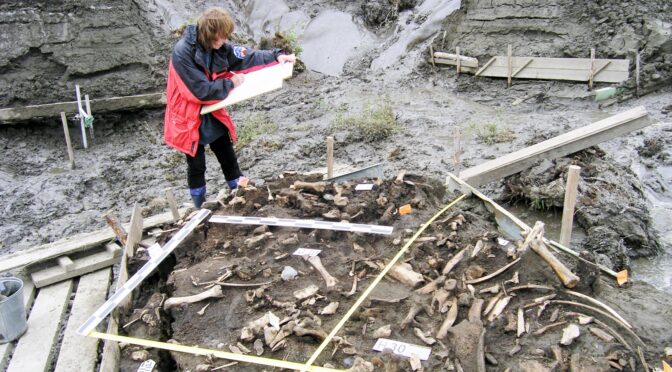 Scientists Extract DNA From Ancient Humans Out of Cave Dirt

Around 45,000 years ago, in a Belgian cave, a Neanderthal died. As its body decayed, its cells split apart, spilling their contents onto the cave floor.

Those remnants included the Neanderthal’s DNA, some of which stuck to minerals in the sediment. There, leashed to the very rock, the DNA persisted, long after its owner’s body had disappeared and its bones had been carted off by scavengers. And in 2015, a group of scientists scooped it up.

Viviane Slon from the Max Planck Institute for Evolutionary Anthropology and her colleagues have now managed to extract and sequence the DNA of ancient animals from sediment that’s up to 240,000 years old. By doing so, they can infer the presence of Neanderthals, Denisovans, and other extinct hominids without ever having to find their bones. “We were surprised by how well it works,” says Slon. “The success rates were amazing.”

“I absolutely loved this,” says Jennifer Raff, who studies ancient DNA at the University of Kansas, and who was not involved in the study. “Although people have been working on recovering ancient DNA from sediments for a few years now, this is unprecedented in scope and success. My notes on the paper are full of exclamation marks. Woolly rhinoceros! Woolly mammoth! Cave bear! Neanderthal and Denisovans!”

Animals have a vast genetic aura that extends beyond their physical bodies into the world around them. Their DNA falls to the ground in balls of dung, zips through the air in blood-sucking insects, and leaches into the soil during decomposition.

Scientists who study living animals have used this environmental DNA (eDNA) to identify everything from elephants and earthworms. They can conduct a census of the natural world without needing to spot any actual animals—a boon when working with rare or hard-to-spot species in inaccessible habitats.

For about 15 years, palaeontologists have tried to use the same technique to study the creatures of prehistory. Just last year, for example, Beth Shapiro from the University of California, Santa Cruz and her colleagues used sedimentary DNA to figure out when and why the second-to-last group of mammoths, which lived on St. Paul Island in Alaska, went extinct.

Studies like these break the traditional reliance on fossils, which can be hard to find, or may have never formed at all. “If one must rely on finding bones, one will always have incomplete data,” explains Shapiro. “But by isolating DNA directly from sediments, we can dramatically expand what we know about where people (or other species) were, when they got there, and how long they stayed.”

“It’s a solution to a number of ethical conundrums in our field.”

Slon’s team is now the first to successfully recover the DNA of ancient humans directly from sediments. They collected samples from seven sites in Europe and Asia, where Neanderthals or Denisovans are known to have lived, and chemically treated their samples to liberate the trapped DNA. In sediment, the vast majority of DNA will come from bacteria and other microbes in the soil.

Only a small fraction comes from animals. To get at that bit, the team created molecules that specifically recognize mammalian DNA, that they could use to fish those sequences out of the crowd.

They focused on mitochondrial DNA—a small cluster of genes that sits outside the main set, and is easier to find because it’s so abundant. And to check that these DNA strands were genuinely ancient, and not bits of genetic material dropped by the palaeontologists themselves, the team looked for the distinctive types of damage that accumulate as DNA sits around for thousands of years.

In addition to DNA from mammoths, woolly rhinos, and cave bears, Slon recovered the mitochondrial DNA of Neanderthals from four caves— El Sidrón in Spain, the Chagyrskaya and Denisova Caves in Russia, and Trou Al’Wesse in Belgium. That third site is especially interesting. We know Neanderthals used Trou Al’Wesse because of the tools and butchered animal bones that they left behind, but none of their visible remains have ever been found. Their molecular remains, however, are still there.

At Denisova Cave, the team also found the DNA of the site’s namesake—the Denisovans. The only known fossils of these hominids are a finger bone and two teeth from the same cave.

In 2010, Slon’s colleagues, led by Svante Paabo, sequenced the mitochondrial DNA from these specimens and realized that they belonged to a previously unknown hominid. That was how the world discovered the existence of Denisovans, and we have learned more about them through their DNA than through their bones. Slon’s work continues that tradition—she found Denisovan DNA in sediment that’s far older than any of the unearthed fossils. “It’s evidence that Denisovans occupied the cave for tens of thousands of years earlier than we thought,” she says.

Now that they know their techniques work, the team can check for hominid DNA in parts of the world where no fossils have been found, or where the historical presence of humans is unclear. For example, Shapiro wants to look at sediments across the Alaska routes that humans likely took on their way to colonizing the Americas. “This is a fantastically useful tool that will empower future archaeological research,” she says.

Even when fossils are present, it’s hard to extract DNA from them without pulverizing them in the process. Slon’s work gets around that problem. “Some descendant communities are okay with us doing genetics research on their ancestors, but not okay with destroying any part of their remains in order to obtain DNA,” says Raff. “But this approach allows us to recover ancient DNA without having to destroy remains. It’s a solution to a number of ethical conundrums in our field.”