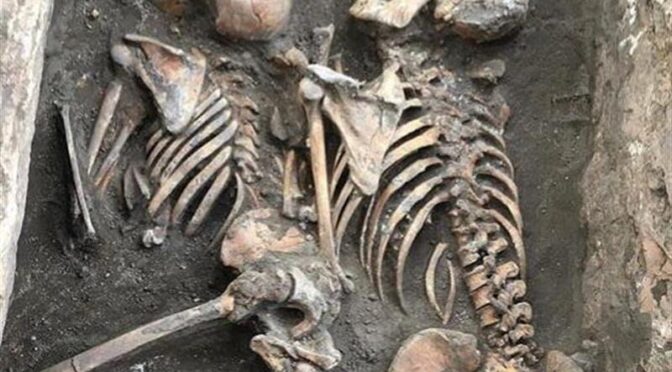 Analysis of the remains of more than 40 people suggests that 35 to 40 years of age was the average life span in central Anatolia some 5,000 years ago, according to a Hurriyet Daily News report.

Archaeological excavations at the Küllüoba Mound, which dates back to the first Bronze Age in the Seyitgazi district of the Central Anatolian province of Eskişehir, have unearthed more than 40 burial sites, including women and children, and research has found that people lived there an average life of 40 years 5,000 years ago.

The mound is believed to be the first urbanization structure of 5,000 years ago in Anatolia.

“The life expectancy of the Early Bronze Age and its contemporaries is around 35-40 years. Infant and child mortality is very high. The limited food sources and the infectious diseases were important factors,” he added.

Excavations in Küllüoba were initiated in 1996. In the past, objects revealing the cultural characteristics of the Early Bronze Age, as well as animal bones and settlements, were found in the excavation area. During the excavations, sarcophaguses and potteries dating back to 3,000 B.C. were found.

A team of 35 faculty members and students from Batman and Hacettepe universities, led by Bilecik Şeyh Edebali University, that have been carrying out works at the Küllüoba Mound have discovered a new cemetery area.

Believed to date back 5,000 years, some 40 tombs were unearthed in the area. Inside the tombs were the skeletons of children with their knees pulled to the abdomen, which is often referred to as the position in the mother’s womb. Seals, hair rings and jewelry, known as gifts to the dead, were also found in the tombs.

Erdal said that they saw the traces of the transition from the Late Chalcolithic to the Early Bronze Age in great detail during the excavations in Küllüoba, which means a historical transition.

Stating that different types of tombs were found in the mound, Erdal said, “The most important element we see here is an area where human communities from different regions coexist and there is a variety of burial traditions due to the coexistence of different cultures, perhaps different ethnic groups. We can say that it is the only settlement where different burials are seen all together.”

Stating that the skeletons provided important data on the historical transition, Erdal explained that the skeletons dating back to the 3rd millennium B.C. showed that people lived only 40 years of age at that time, and then lost their lives.

Explaining that the significant part of the skeletons were children and women, Erdal said, “Most of the skeletons are of infants, children and young individuals. Of course, if we consider that the life expectancy of the people of this period was extremely limited, that is, they lived an average of 35-40 years, we can actually say how painful this transformation was. Wars and fights were also effective in this.

The life expectancy of the Early Bronze Age and its contemporaries is around 35-40 years. People died at a very young age. Infant and child mortality was very high. The limited food resources and infectious diseases were also factors, too.”

A Bilecik Şeyh Edebali University academic and the head of the excavations, Murat Türkteki said that during the Küllüoba excavations, the first urbanization structure in Anatolia 5,000 years ago was unearthed.

Stating that this year’s works, mostly structures and tombs dating back to 3,000 B.C. were unearthed, he said, “We work in two areas. There was an important breaking point in Anatolia 5,000 years ago, especially in terms of the beginning of urbanization. Küllüoba also gives us important information on this subject.

The excavations this year help us to understand the changes at this stage; we see that the boundaries are wider and larger. We started working in the cemetery area in previous years.

We reached more than 40 graves. Especially the fact that different types of tombs are seen together makes Küllüoba different and special in this sense.

The skeletons were sent to Hacettepe University Ancient DNA Laboratory for examination. It will provide data such as diseases, causes of death and living conditions. Ancient DNA studies will reveal kinship relationships more clearly.”