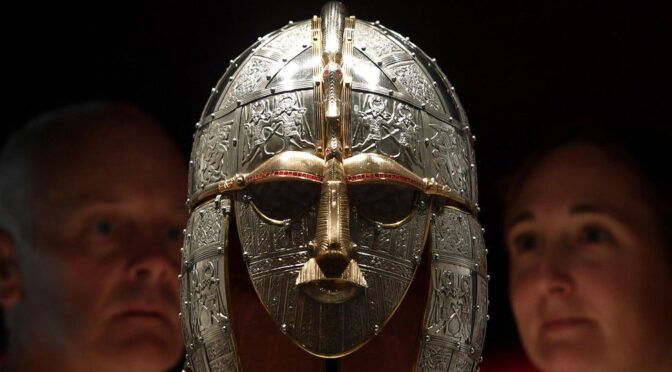 Sutton Hoo: One of the most magnificent archaeological finds in England

In 1939, an excavation was carried out on two 6th and 7th-century cemeteries at Sutton Hoo, near Woodbridge in Suffolk, England.  Beneath Mound No. 1, a stunning archaeological discovery was made.

Historians were amazed to find an undisturbed ship burial that contained a wealth of outstanding artefacts of significant cultural and historical significance.

The ship was built from oak and was found to have a tall, rising stem and stern that measured 27 meters.  At its broadest part, the ship was 4.4 meters wide, and it had an inboard depth of 1.5 meters.  The hull followed a clinker construction style, with nine planks on each side of the hull riveted together with iron rivets.

The ship had been laboriously carried from the river and carefully placed in a prepared trench.  It was buried at a depth where only the stem and stern posts peeked out of the ground.

The body and all the funeral artefacts were then placed in the ship, and the site was covered with a soil mound.  The burial place remained undisturbed until carefully uncovered by archaeologists in 1939.

This excavation was an incredibly important find, as it straddled the time in English history between myth and legends and the creation of historical documentation. It is generally accepted that the ship was the tomb of Raedwald, who was the ruler over East Anglia.

There was no body found, but analysis of the soil indicates that there was a body that had been destroyed by the acidic soil.  The coffin or wooden platform that carried the body was close to 9 feet long.

From the distribution of the artefacts, it appears the head was placed at the western end of the platform.  The archaeologists found an iron ringed bucket, an iron lamp that still had its beeswax fuel inside, and high-quality personal items such as a helmet, belt buckle, shoulder tabs, jewellery, coins, silverware, and armour.

Only one occurrence of Middle Eastern bitumen had been found in the British Isles prior to this discovery, but the Sutton Hoo bitumen is older than the previously discovered specimen. This new discovery is very exciting, as it adds further evidence to the theory that the Anglo-Saxons traded over a far wider territory than was previously thought.

The bitumen was not left in the grave by mistake.  It was deliberately placed at the head and foot of the body, and its proximity to the body indicates its value to the people.  It is not clear if this bitumen was a diplomatic gift or if it was a product gained through trade routes, but its presence in the grave indicates that the Anglo-Saxons traded widely and made use of goods brought from afar.

It is evidence that the bitumen deposits in the Middle East were traded north through the Mediterranean Sea and across Europe to reach as far north as England, Mail Online reported.

The discovery of trade goods such as this bitumen adds extensively to our understanding of how people lived in this era since the myths and legends of that time tend to obscure facts.  Historians can use these artefacts to try to identify how trade routes worked, and thus learn more about how people moved and interacted so long ago.