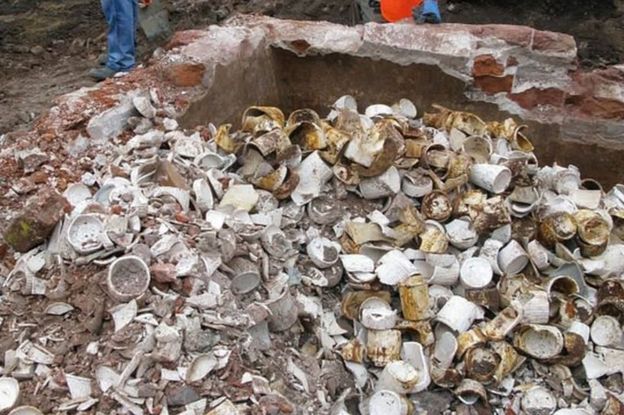 When the London Archeology Museum (MOLA) investigated the site of a proposed new London train station, they did not expect to find a stash of over 13,000 smashed pickling pots and jam jars dating back to the 1900s.

The stash was discovered during the construction of the railway station under an old nightclub. The area used to be a dumping ground for rejection from a factory that stood on the site until 1921 in Crosse & Blackwell (a British specialty food company).

The find included over 13,000 various containers. They ranged from bottles of mushroom catsup (a popular Victorian condiment) Piccalilli pots, and jars for marmalade and jam. All of them were discovered in a cistern that stood beneath the factory’s warehouse.

Nigel Jeffries, an archaeologist with the Museum of London Archaeology, explained that the cistern used to be filled with water during the factory’s production.

It was built in order to power the steam engines in the factory, but when the building was redesigned in the 1870s, the cistern became obsolete. After that, the cistern was used as a landfill by the Victorians.

While it may seem strange that archaeologists would want to dig up the Victorian trash pile, a person’s trash can tell us a lot about how they lived. Trash piles are a historian’s treasure.

This discovery is helping researchers learn more about “the tastes and palates of the Victorians”, Nigel Jeffries pointed out.

Crosse & Blackwell were based in this area of London between 1830 and 1921, right smack dab in the middle of the industrial revolution and the Victorian era.

Records of the factory say it produced “a very distinctive pungency to the surrounding atmosphere”, which is saying a lot considering it was hard to smell anything during that time period through London’s notorious smog.

The find was originally made by London’s Crossrail Project, a government-funded project that’s revolutionizing London’s train system and building a new railway for the city.

Due to the nature of the project, they have to do a lot of digging, and they’ve dug up all sorts of archaeological finds recently, including several skeletons dating back to the Black Plague, an entire mass-grave dating back to the Dark Ages, and some history of Bedlam Hospital. They’re taking great pains to ensure that no British history is lost in the construction of the new rail line.