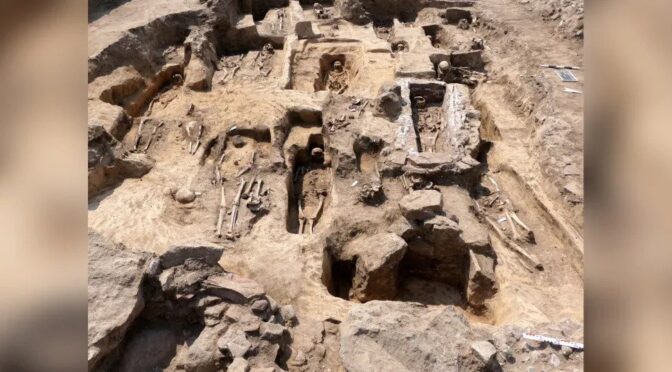 Archaeologists searching for a royal palace in Germany have discovered a 1,000-year-old church constructed for Otto the Great (also called Otto I).

Otto I, who lived from A.D. 912 to 973, consolidated and expanded the Holy Roman Empire. The empire, which was centred in Germany, controlled territory throughout central Europe.

Historical records indicated that a palace and church were built near Helfta in Saxony for the Roman emperor; and archaeologists with the State Office for Monument Preservation and Archeology Saxony-Anhalt started searching for it in May, they said in a German language statement.

The three-aisled church is about 100 feet (30 meters) long and was shaped like a cross, excavations revealed.

The church was destroyed during the Protestant Reformation that swept through Europe in the 16th century and led to the creation of new branches of Christianity, the archaeologists said in the statement.

The church and palace would have “dominated” the valley where they were built, the archaeologists said.

Among the artifacts found so far is a Romanesque bronze crucifix decorated with enamel that was made in Limoges in New Aquitaine (in modern-day France) in the 13th century, archaeologists said.

The archaeologists have also found several burials around the church, including some tombs made out of bricks.

Excavations and analysis of the remains are ongoing at the site. Right now, excavating the church is a priority, but historical records indicate that the palace is nearby and remains of it may be found as work continues.

Historical records say that while Otto I ordered the construction of the church and a nearby palace, he himself only visited it once when the church was inaugurated around A.D. 968.

The archaeologists noted that Otto I had numerous palaces with nearby churches located throughout his empire.

Felix Biermann, an archaeologist with the State Office for Monument Preservation and Archeology Saxony-Anhalt is leading the excavation team.