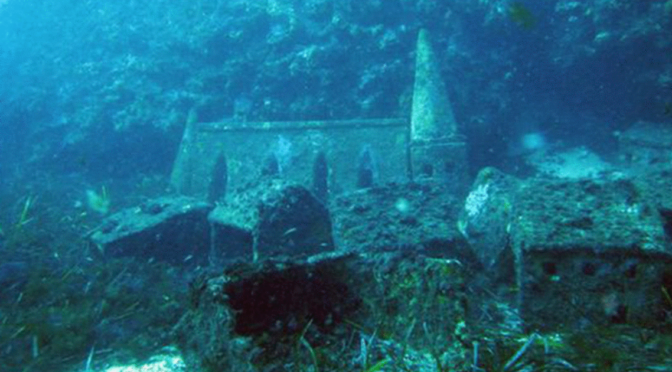 The Prairies are home to tons of hidden treasures, some of which are hiding right under our noses. Even though this lake is super popular and is located in a huge national park, few could ever guess a ghost town lies just beneath the waters.

The sunken city under Lake Minnewanka is a hidden treasure that few have seen and it’s waiting to be discovered.

Deep below the surface of the lake’s pristine waters is the sunken resort town of Minnewanka Landing. While it used to bustle with tourism and life, according to Parks Canada, its only residents are now trout and the occasional scuba diver.

The village was built way back in 1888 when the water levels were much lower. Soon, cottages sprung up, restaurants and hotels were built, and even a boat tour started ferrying travellers around the scenic lake. For a little while, life was great at Minnewanka Landing.

Over the years the town grew to include four avenues, three streets, dozens of cottages, numerous hotels and restaurants, and multiple sailing outfits that would take guests on boat excursions around the (much smaller) original lake.

It wouldn’t be until 1912 that the area’s landscape would start to evolve with the construction of a new dam—part of a Calgary Power Co. hydroelectric plant operation being set up downriver—resulting in the flooding of a good portion of Minnewanka Landing.

But while the town continued to thrive over the next two decades (42 lots were built to make way for additional cabin sites), it would finally meet its fate in 1941 with the building of a new dam, which raised the reservoir’s waters by 98 feet, engulfing everything in its wake.

“It was during the Second World War and everyone was hungry for power,” Bill Perry, an archeologist with Parks Canada, tells Smithsonian.com. “Calgary and the surrounding area were growing substantially during that point in time and required more power, so Lake Minnewanka was seen as an easy end.”

Today the reservoir hides a secret that many people will never get the chance to experience—unless they’re scuba divers, that is. Thanks to Lake Minnewanka’s glacier-fed, ice-cold waters, many structures of the former resort town still remain intact, including house and hotel foundations, wharves, an oven, a chimney, a cellar, bridge pilings, and sidewalks. (A full list of sites is available here.) Even the footings from the town’s original dam, built by the federal government in 1895, along with the footings from the dam built in 1912, remain visible.

Another notable site nearby is a native campsite that dates back thousands of years.

In recent years, archaeologists have uncovered spear points, arrowheads, ancient weapons known as atlatls, stone tools, and other implements used by indigenous tribes who once lived there.

“What is particularly interesting about that for me is looking at the whole area as a cultural landscape,” Perry says. “The area’s 13,000 years of continuous use absolutely fascinates me.”

And Perry isn’t alone. He estimates that approximately 8,000 divers descend into the lake each year to explore its hidden past.

“Because of the cold, clear water, wood actually survives quite well down there,” he says. “That’s why it has become such a popular diving place for local scuba diving clubs. There’s just so much left to see.”