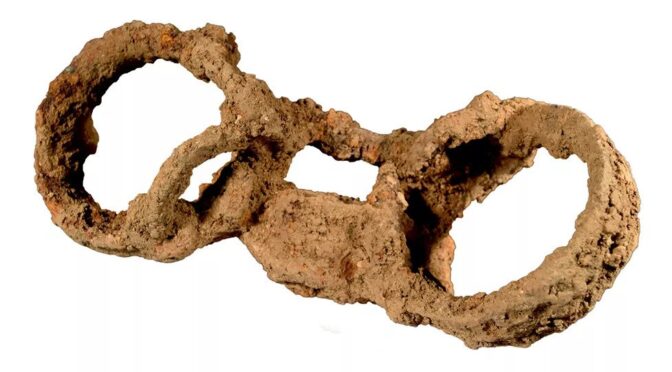 His ankles secured with heavy, locked iron fetters, the enslaved man appears to have been thrown in a ditch – a final act of indignity in death.

Now the discovery of the shackled male skeleton by workers in Rutland – thought to have been aged in his late 20s or early 30s – has been identified as rare and important evidence of slavery in Roman Britain and “an internationally significant find”.

It was also desperately grim, said Chris Chinnock, one of the archaeologists working on the project, but was important because it “forces us to ask questions that we wouldn’t ordinarily ask”.

Builders came across the bones when they were constructing a conservatory at a house in Great Casterton. Police were called and subsequent radiocarbon dating showed the remains were from between AD226 to AD427.

Archaeologists from the Museum of London Archaeology (Mola) were called in and have been researching the skeleton, with their findings published on Monday in the journal Britannia.

No one doubts that slavery existed during the Roman occupation of Britain but discovering direct archaeological evidence is another matter. Most of what is known come from inscriptions. “To have the opportunity to study the body of a person who quite probably was a slave is really important,” said Michael Marshall, a finds specialist at Mola.

The Great Casterton discovery is the first of its type in Britain, described by researchers as the clearest case of a burial of an enslaved individual found in the UK. “This burial is exceptionally unusual,” said Marshall.

Precisely who the man was will never be known but a number of informed guesses can be made. “It could be the dead person was somebody who had earned the ire of other people,” said Marshall. “Equally it could be that the people who buried him were tyrannical and awful. We can’t really understand the moral dimensions.”

The team have been examining a number of theories including that the shackles might have been added after the man died to demean him or brand him as a criminal in the afterlife.

The few skeletons found with shackles in other countries are normally the victims of natural disasters and have not been buried. That is not the case in Great Casterton, say archaeologists.

The burial position is an awkward one, said Chinnock, with the skeleton slightly on his right side and his left side and arm elevated on a slope. There is a Roman cemetery just 60 metres away, suggesting a conscious decision not to bury him properly. The likely explanation is that he has been thrown in a ditch and covered over.

Chinnock, an expert in ancient bones, said the man appeared to be between 26 and 35 and had led a physically demanding life. A bony spur on an upper leg bone may have been caused by a fall or blow or be the result of a life filled with excessive physical activity. The injury had healed by the time he died and the cause of his death remains unknown.

The Mola team say the identity of the man will never be known but “the various pieces of evidence present the most convincing case for the remains of a Roman slave yet to be found in Britain”.

A number of questions remain around the Great Casterton man but it was clear, Marshall said, that it was “extraordinary” evidence of mistreatment. “For living wearers, shackles were both a form of imprisonment and a method of punishment, a source of discomfort, pain and stigma which may have left scars even after they had been removed.”

It was difficult to get away from the conclusion that the people who disposed of the shackled man “really hated him and were really keen to make that obvious, whether to other people or in the longer, more spiritual sense”.