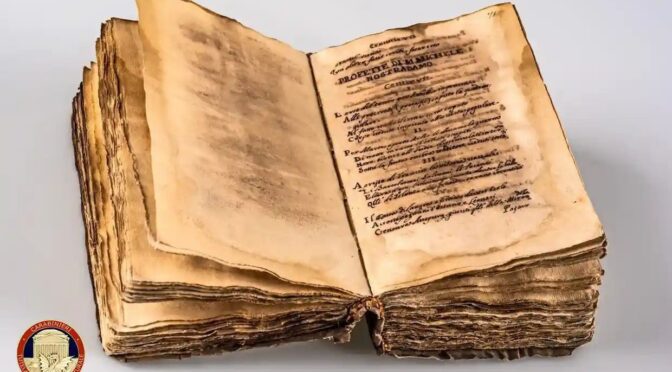 The Stolen Nostradamus manuscript is returned to the library in Rome

An ancient manuscript by the French astrologer Michel de Nostredame, better known as Nostradamus, stolen from a library in Rome has been returned to the Italian capital.

The manuscript, entitled Nostradamus M Prophecies and dating back about 500 years, was rediscovered last year when it was put up for sale by a German auction house.

It is unclear exactly when the 500-page manuscript was stolen from the historical studies centre of the Barnabite fathers of Rome, but it is believed to have been in about 2007.

The book passed through flea markets in Paris and the German city of Karlsruhe before an art dealer tried to sell it through an auction house in Pforzheim, Baden-Württemberg, at a starting price of €12,000 (£10,200).

In April last year investigators from Italy’s cultural heritage protection squad came across the book on the auction house’s website. They identified it as originating from the library in Rome via a stamp dated 1991 on one of the pages.

Rome’s public prosecutor contacted his counterpart in Pforzheim, who began an investigation.

German experts established the book was an original work of Nostradamus, who was famous for his cryptic prediction of world events, and was the one trafficked from Rome.

The manuscript was returned to the library on Wednesday.

Italy’s cultural heritage protection team was established in 1969 and has retrieved more than 3m stolen artefacts.

In December 2021 the US returned about 200 antiquities, including an ancient Roman sculpture that almost ended up in possession of Kim Kardashian West, that had been stolen and smuggled out of Italy.

The text and picture caption was amended on 10 May 2022. An earlier version said the manuscript dated about 300 years; we should have said nearly 500 years.