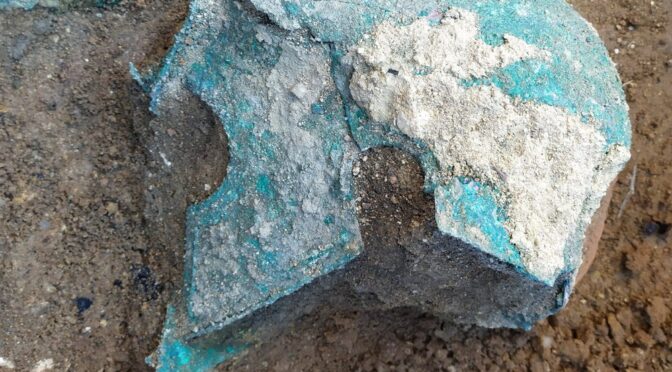 These Ancient Greek Helmets Tell of a Naval Battle 2,500 Years Ago

Archaeologists in southern Italy announced last week that they unearthed two helmets, fragments of weapons and armour, bits of pottery and the remains of a possible temple to Athena at an archaeological excavation of the ancient Greek city of Velia, reports Frances D’Emilio for the Associated Press (AP).

Researchers, who have been working at the site since last July, announced in a translated statement that they believe that these artefacts are linked to a major maritime battle that changed the balance of power in the Mediterranean nearly 2,500 years ago.

Ancient Greeks may have left the items behind after the Battle of Alalia. Between 541 and 535 BCE, a fleet of Phocaean ships—who had set up a colony, Alalia, on the island of Corsica—set sail on the nearby Tyrrhenian Sea to fend off attacks from neighbouring Etruscan and Carthaginian forces, per the statement.

Though the Greeks emerged victoriously, the costly sea battle ultimately spurred the Phocaean colonists to leave Alalia and establish a colony closer to other Greek settlements along the southern coast of Italy.

Settlers from Phocaea sailed for the mainland and purchased a plot of land that would eventually become Velia, according to the Guardian.

Initial studies of the helmets reveal that one was designed in the Greek Chalcidian style, while the other helmet resembles the Negua headpieces typically worn by Etruscan warriors, per ANSA.

The archaeologists suggest Greek soldiers might have stolen these helmets from conquered Etruscan troops during the Battle of Alalia, per the statement.

In another major find, researchers also unearthed several brick walls that date to Velia’s founding in 540 B.C.E. and may have once formed a temple to the mythical Greek goddess of war and wisdom, Athena, as Angela Giuffrida reports for the Guardian.

Measuring about 60 feet long by 23 feet wide, the walls were likely constructed in the years just following the Battle of Alalia, says Massimo Osanna, the archaeological park director and head of Italian state museums, per Italian news agency ANSA. The archaeologists say the Phocaeans may have offered the enemy armour as a tribute to the goddess.

“It is, therefore, possible that the [Phocaeans] fleeing from Alalia raised [the temple] immediately after their arrival, as was their custom, after purchasing from the locals the land necessary to settle and resume the flourishing trade for which they were famous,” says Osanna in the translated statement. “And to the relics offered to their goddess to propitiate her benevolence, they added the weapons snatched from the enemies in that epic battle at sea.”

Located near the structure, the team found fragments of pottery inscribed with the Greek word for “sacred,” several pieces of bronze and metal weapons and bits of what appears to be a large, decorated shield.

Researchers plan to clean and analyse the artefacts in a laboratory for further study, where the director says they hope to find more information, particularly on the helmets.

She says in that statement that there may be inscriptions inside of them, something common in ancient armour, that could help trace the armour’s history, such as the identity of the warriors who wore them.