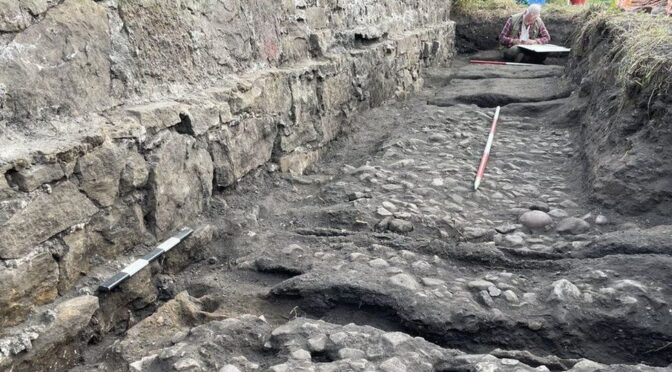 BBC News reports that three layers of wooden tracks constructed for the horse-drawn Tranent Waggonway have been uncovered in East Lothian by researchers from the 1722 Waggonway Project.

The Tranent Waggonway in East Lothian was first constructed in 1722.

It was initially built for hauling coal from a pit at Tranent to Cockenzie and Port Seton for use as fuel in a process for making salt.

New archaeological excavations have revealed three wooden railways, each one laid immediately on top of the last.

The 1722 Waggonway Project said it appeared to have been an attempt to upgrade the railway with “crudely cut timbers” over a short period of time.

The gauge – the distance between the two rails – was also changed from an initial 3ft 3in (about one metre) in the first phase to 4ft (1.2m) in the second and third phases.

The project team said there was no other site like it in railway archaeology.

The second phase was described as “extremely well constructed”, with cobbles laid to form a track between the rails for the horses that pulled the waggons.

Railway historian Anthony Leslie Dawson said: “Whilst we know these railways had a limited lifespan due to their method of construction, to see this process of continual replacement and upgrade – including a change of gauge – in the archaeological record is outstanding.

“The waggonway excavation has shown that these waggonways are far more complex than the single-phase structures previously excavated, and the survival of timber on-site including joints helps us further understand the construction of these early railways.”

The project’s archaeologists also excavated a salt pan building in Cockenzie, and discovered evidence of use of the site in the production of salt lasted from 1630 to about 1780.