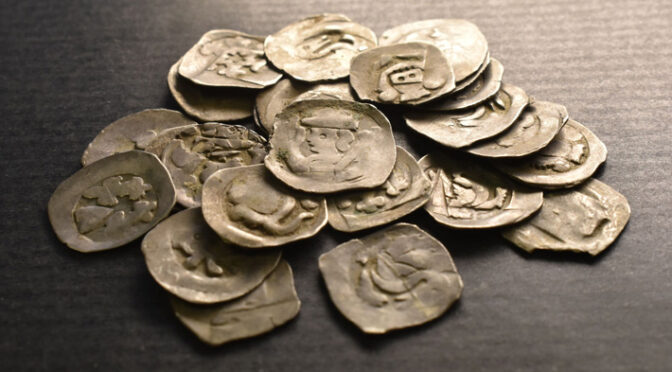 The Slovak Spectator reports that a cache of medieval coins was discovered under an uprooted tree in western Slovakia by a tourist who reported the find to the Regional Monuments Board.

He has reported it to the Regional Monuments Board (KPÚ) in Trnava. Its workers found 147 middle-age silver coins after searching with a detector.

The coins were probably stored in a leather or fabric wrapper, Matúš Sládok of KPÚ Trnava opined, but there were no traces left of the wrapper.

Died or did not remember

Mass findings of pfennigs, which were hidden during the mid-14th century, are not uncommon, according to Sládok.

“Owners hid their movable property, especially finances, in unstable times when they were trying to protect it from enemies and robbers,” Sládok said, as quoted by the TASR newswire.

The fact that these coins were discovered means that the owners probably died or forgot to unearth their hidden money, Sládok explained.

An expert will now estimate the value of the discovery. The tourist who found the coins has asked for a finder’s fee.