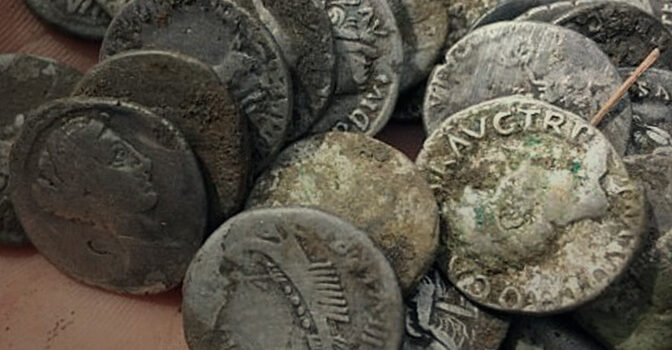 Treasure Hunter discovers £200,000 worth of ancient coins in the farmer’s field

During the Roman period, Some of the metal discs were minted. General Mark Antony was associated with his lover Cleopatra in Egypt. Experts agree that a discovery of this scale and range is very unusual.

The 35-year-old fishing man Mike Smale is shocked by his discovery of an unspoiled Coin after another coin that dates back to 32BC and can go up for £ 900 ($12,000). The coins will be handed over to the coroner for valuation and then likely sold to a museum, with the profits split between the farmer and Mr Smale.

Mr Smale, 35, found the hoard of 600 rare ancient coins in a farmer’s field in Bridport while hunting with friends from the Southern Detectorists club.

Father-of-one Mr Smale, a fisherman from Plymouth, Devon, said: ‘It was incredible, a true once-in-a-lifetime find.

‘I had a good idea about what it was – I had already found one or two Roman denarii that morning.

‘It’s a great find, my biggest one, but I shan’t be giving it up. It’s great fun and I’m sticking with it’, he said.

The astonishing find was made at an undisclosed farmland location in Bridport at the detectorists annual event, attended by 300 people.  When I found it everyone came over to have a look and find out what it was’, said Mr Smale.

‘It’s impossible to say what it’s worth, it all depends on too many factors.. How rare they are, what condition they are in, things like that.

‘But it is a substantial find, and whatever I do get I’m going to split with the guys I went up there with.’

Just a few hours in, Mr Smale’s detector started beeping manically and he quickly discovered a few coins, before he called over the officials who sectioned off the area.  They believe it was a pot of coins which had been hit by a plough and spread across the area. The event was organised by Sean MacDonald, 47, who admits he would have paid ‘good money’ just to witness the find.

He added: ‘Bridport is a cracking area anyway, it’s very rich in history, but a find like this is unprecedented.

‘I’ve never seen a hoard of this size before. We found one in Somerset last year but there were just 180, and they weren’t of the same calibre.’

Mr MacDonald said he was elated he was shaking when he saw the find. The archaeologists excavating it couldn’t believe what they were seeing because these coins are so rare’, said Mr MacDonald.

‘I personally think a find of this size and variety will never be found again.’

An expert who has examined photos of the coins said some feature Gods, and were issued by the Roman Republic in the centuries before the birth of Christ.

‘Others, which feature a distinctive galley – a type of Roman vessel – were minted by Mark Antony while he was allied with his lover Cleopatra in Egypt, between the Autumn of 32 BC to the Spring of 31’, said Dominic Chorney of A.H. Baldwin & Sons.

These coins each celebrated the various legions under his command, Mr Chorney explained. They would have circulated widely in the Roman Empire and travelled a long way.

‘Republican coins and those of Antony were issued before the Roman Invasion of Britain in AD 43, and would have drifted over in the pockets of Roman soldiers and citizens alike’, said Mr Chorney. Other coins were issued by emperors who ruled during the first century AD.

‘One I can see in the photograph was struck for the ill-fated emperor Otho, who only ruled for three months in (January to April AD 69), during the civil wars which followed the assassination of the notorious emperor Nero’, said Mr Chorney.

‘Coin finds such as this are fascinating, and are incredibly important in shedding light on the history of Roman Britain’, he said.