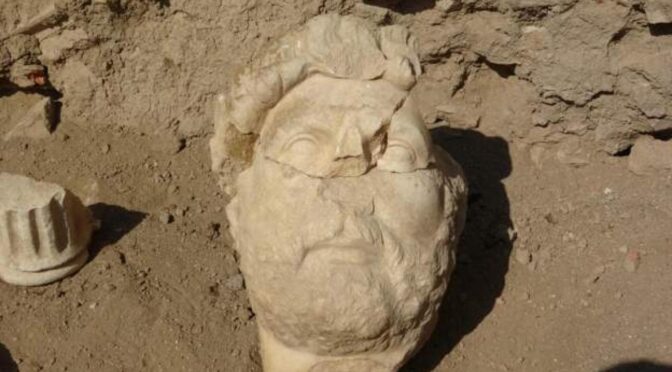 The news was released today that an ancient statue of the famous Roman emperor Hadrian was found in the southwestern Aydin province of Turkey, where the ancient city Alabanda once stood. It has been dated to the 2nd century CE, some 1900 years ago.

This discovery is being placed among the most important archaeological discoveries ever made in Turkey.

The statue is fragmented but the head has survived to our present-day and the original is believed to have been about 2.5 meters tall (8.2 feet).

“The statue, which we found in six pieces, will be one of the most important works in the museum. … For more detailed information about the statue, we are working to find inscriptions containing honorifics.”
Ali Yalcin Tavukcu,

lecturer in the Department of Classical Archaeology at Ataturk University.

Hadrian is commonly believed to have ruled from 117 CE until his death in 138 CE.

Ali Yalcin Tavukcu reported that Hadrian visited the city in 120 CE and that this statue was likely created for the occasion.

The culture and tourism director for Aydin, Umut Tuncer, expressed his hope that this discovery will increase the amount of tourism in the area.

The Romans had taken control of the region around the turn of the first millennium CE and their successors maintained control until the Ottomans seized Constantinople in 1453.

Hadrian might be most popularly known today for the wall he is credited with building in Britain, known as Hadrian’s Wall. He built this as a divider and defence against the northerners that he saw as barbarians.

As of now, I have not seen any reports of forensic sciences being applied to the statue to confirm the 2nd century CE date.

Any mentions of dating methods, as well as why they think it’s Hadrian, has been absent from the reports I’ve seen.

More information is sure to be released about this discovery so stay tuned.