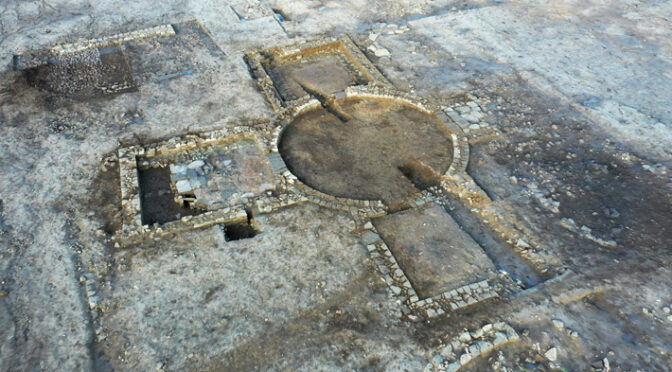 BBC News reports that a large villa complex with its own bathhouse has been discovered at a construction site in northern England. Keith Emerick of Historic England said the house, which has a circular central room flanked by additional rooms, is the first of its kind to be found in Britain.

Keepmoat Homes, which was hoping to develop a new housing estate in the Eastfield area of the North Yorkshire region, found the ruins of the settlement.

But the importance of the find may well have caused a headache for bosses of the firm, with Historic England saying it’s ‘easily the most important discovery of its kind.

Historians believe they’ve identified a whole complex of buildings. It includes a tower-shaped structure, which is thought to have had rooms and a bathhouse leading from it.

Keith Emerick, inspector of ancient monuments at Historic England, said: ‘One of the descriptions we had was that it is something like a religious building that is almost like a gentleman’s club, there’s a bathhouse as well. So it’s a really interesting hybrid building at the moment.’

These archaeological remains are a fantastic find and are far more than we ever dreamed of discovering at this site. They are already giving us better knowledge and understanding of Roman Britain.

We are grateful to Keepmoat Homes for their sensitive and professional approach to helping ensure the future conservation of this important historical site.

Not only is it a first for Britain, but it could also be a first for the whole of the former Roman Empire.

Emerick added: ‘I would say this is one of the most important Roman discoveries in the past decade, actually. Easily.’

Keepmoat Homes have changed the initial plans and will not build on top of the site, but will still build in the area.

Historic England hopes the remains will be accessible to the public in future.