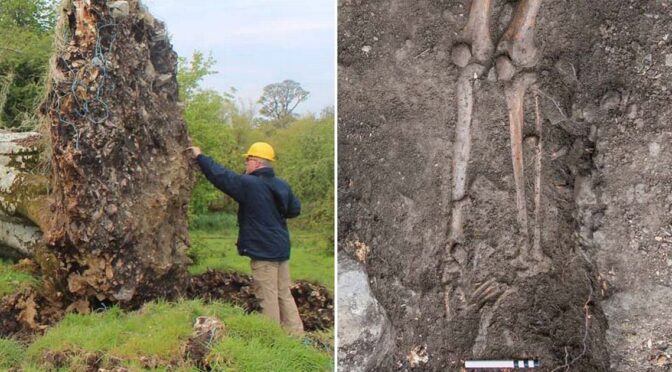 Uprooted tree reveals a violent death from 1,000 years ago

The remain of a young man who died of what appears to be knife wounds sometimes between ad 1030 and 1200 was discovered tangled in the roots of a 215-year-old beech tree.

A hurricane erupted over the wild Atlantic shores of northwestern Ireland and fell a 215 years old beech tree in the middle of a County Sligo field straight out of the ground.

It was not the huge tree that drew widespread attention, but what was discovered snapped up in his twisted roots – half a human skeleton pulled out of his grave. It was not the massive tree.

After learning of the discovery of the bones, Ireland’s National Monuments Service called in archaeologist Marion Dowd to undertake a rescue excavation of the body that had, in essence, risen from the grave.

In her 20 years of academic and commercial work, Dowd had never seen anything like what she encountered at this site.

Having just launched her own private firm, Sligo-Leitrim Archaeological Services, Dowd couldn’t have asked for a more bizarre maiden project. “

As excavations go, this was certainly an unusual situation,” Dowd says. “The upper part of the skeleton was raised into the air trapped within the root system.

The lower leg bones, however, remained intact in the ground. Effectively, as the tree collapsed, it snapped the skeleton in two.” The bones still in the burial plot were in a very well preserved condition.

After Dowd’s excavation, osteoarchaeologist Linda Lynch conducted a three-month analysis. Last week, the results of the radiocarbon dating revealed that the grave belonged to a young man between the ages of 17 and 20 who died during the medieval period between 1030 and 1200 A.D.

With a height of 5 feet, 10 inches, he was much taller than the average medieval person, which indicates he came from a family with a relatively high social status who could afford a nourishing diet.

However, he didn’t have an easy childhood as a mild spinal joint disease suggests he was involved in physical labor from an early age.

Dowd determined that the medieval teenager had received a formal Christian burial because his body was placed on his back in a traditional east-west orientation with his arms by his side.

While historical records indicate there was once a church and graveyard in the general area, no other bones or signs of additional burials were discovered in the immediate vicinity of the fallen tree.

Dowd estimates the grave was at least a foot under the ground and says the person who planted the beech tree around 1800 would have been unaware of the presence of a grave just below his feet.

It appears that the young man’s demise was a violent one. Dowd found two cuts to his ribs that were inflicted by a single-edged weapon, probably a knife.

She also discovered a visible stab wound to the left hand which suggests he may have attempted to defend himself from his attacker.

“This burial gives us an insight into the life and tragic death of a young man in medieval Sligo,” Dowd says. “He was almost certainly from a local Gaelic family, but whether he died in battle or was killed during a personal dispute, we will never know for sure.”

Dowd says there are no plans yet for further analysis of the bones, so this medieval murder mystery may endure.

The remains found beneath the uprooted tree will eventually be sent to the National Museum of Ireland in the capital city of Dublin.