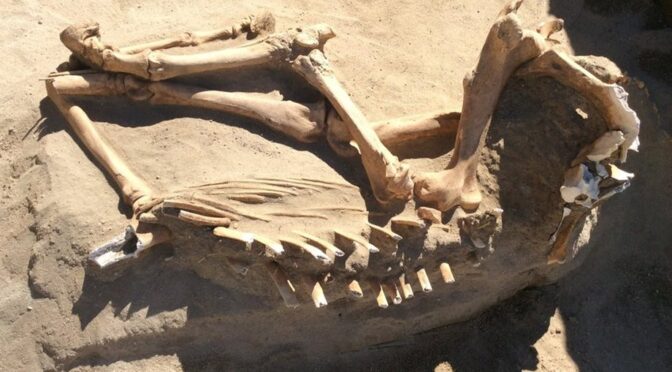 Laura and Bridger Hill dug their yard after embarking on a home building project But something surprising emerged into the soil when a portion of the earth was removed: a row of rib bones. That certainly wasn’t all, though.

Following further investigation, the Hills realized that they had the nearly complete skeleton of some mysterious creature on their hands. Yet even at this point, the family had no clue as to the significance of their find.

A paleontologist said Wednesday the bones may date back as much as 16,000 years.

Bridger and Laura Hill discovered the ancient remains late last fall and consulted a neighbor, who referred the couple to the paleo lab at Thanksgiving Point’s Museum of Ancient Life.

Tuesday and Wednesday, paleontologist Rick Hunter and his team carefully excavated the bones, which Hunter said belonged to an Ice Age-era horse.

“We’ll be able to learn some really interesting things from this skeleton,” Hunter said. “It’s probably about 16,000 years old, roughly.”

Bridger Hill said the remains were first spotted by his son.

“We started digging away with our fingers and saw ribs,” Hill said. Hunter said the skeleton was mostly intact, though team members were still working to locate the skull.

“What you see behind us there is a massive excavation to find more skull elements and teeth,” volunteer Lane Monson said.

The scientists ended up recovering several teeth, including a molar that wound up in fossil preparologist Sara Wootton’s hands.

Visker said the team had been carefully sifting through the sand and dirt in the Hill’s backyard for two days.

“You have to have a lot of passion for something to want to dig all day long in the dirt, I guess,” she said.

Hunter said the scientists would take the remains back to the paleo lab and try to reconstruct the bones, with hopes that they would be able to determine the exact species, as well as answer several other questions about the creature’s health and structure.

Hill said he never expected that kind of find in his yard.