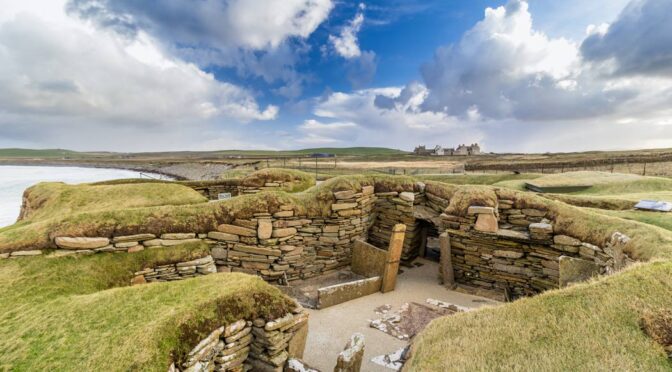 The Scotsman reports that a well-preserved skeleton has been discovered in a tightly constructed stone burial cist about a half-mile from the Neolithic site of Skara Brae on the island of Orkney.

This researcher, a member of the archaeological team, is digging here in an effort to discover more about the skeleton, which is lying in a crouched position on its right-hand side, with the cist some three-metres wide and covered with a heavy stone slab.

It is too early to determine whether the bones are those of a man or a woman or if anything else was buried with them. But the robustness of the cist has left the skeleton virtually intact, with small bones – such as toes – surviving thousands of years.

Martin Cook, director of AOC Archaeology, said: “The size and scale of the cist would suggest it is a late Neolithic or early Bronze Age burial.

“We think the skeleton is buried by itself and not part of a cemetery. It is obviously very close to Skara Brae.”

Mr Cook said it was too soon to say whether the burial was linked to Skara Brae, the Neolithic settlement that was occupied from around 3180 BC to 2500 BC.

“This could be a later grave,” Mr Cook added.

Evidence of other unexcavated settlements has recently been found on the coast at the Bay of Skaill.

Mr Cook added: “We are currently removing the skeleton and what we are looking for is material goods, things like pottery or animal bones or whether a joint of meat were buried with it.

“The skeleton was laid down in a crouched position and we can see the leg bones, the arms and the toes. Sometimes animals like voles will get in and take the smaller bones but this cist was really well, tightly built. It looks like all the bone is there and well.”

The find was reported to archaeologists after it was discovered during work on the Davidson cattle farm at Skaill. The excavation was carried out by AOC Archaeology on behalf of Historic Environment Scotland.

A spokesperson for Historic Environment Scotland (HES) said “We were approached by the local authority archaeologist in Orkney for assistance after the discovery of a cist burial in the buffer zone of the Heart of Neolithic Orkney World Heritage Site. AOC Archaeology, current holders of our excavation call-off contract, is attending the site and will be carrying out an archaeological excavation.”

The find comes shortly after evidence of a possible Neolithic or Bronze Age settlement in the Bay of Skaill area was discovered around half a mile from Skara Brae.

The finds of a badly damaged wall, which had been exposed due to the pounding tides on this stretch of coast, along with deer antlers, a boar tooth, a cattle jawbone and a large decorated stone have led archaeologists to consider whether “another Skara Brae” is waiting to be discovered.

Sigurd Towrie, the spokesman for the Archaeology Institute at the University of Highlands and Islands, said earlier this month that the finds “suggest there is another settlement at the Bay of Skaill – one that, from previous environmental sampling, is likely to be 4,000 to 5,000 years old”.