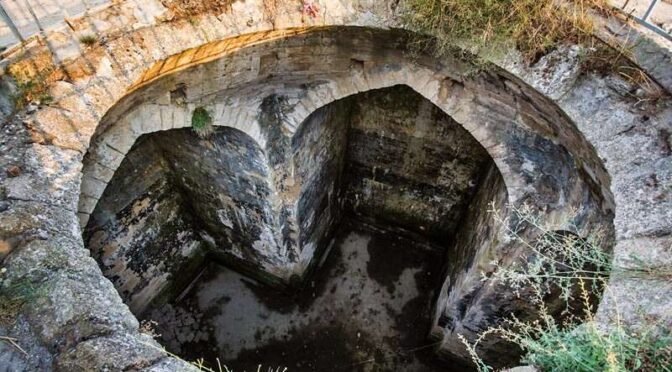 Using a celestial phenomenon, archaeologists are probing a mysterious structure buried deep underground in Russia. The structure could be one of the world’s oldest Christian churches, according to a new study.

The unknown structure sits in the northwestern part of the fortress of Naryn-Kala, a fortification in Derbent that dates to around A.D. 300.

The 36-foot-deep (11 meters) cross-shaped structure is almost completely hidden underground, save for a bit of a half-destroyed dome on top. But because it’s a UNESCO cultural heritage site, the structure is protected and can’t be excavated — and its function remains largely debated.

The structure may have served as a reservoir, a Christian church or a Zoroastrian fire temple, according to a statement from the MISIS National University of Science and Technology in Russia.

So, a group of researchers decided to harness a celestial phenomenon called cosmic rays to help them paint a picture of the structure, similar to how a group discovered a possible void in the Great Pyramid of Giza back in 2017. They call this method “muon radiography.”

Cosmic rays are a form of high-energy radiation that comes from an unknown source outside our solar system; they constantly rain down on Earth.

Though most of the rays crash into atoms in our planet’s upper atmosphere and don’t make it to the ground, some, called muon particles, are ejected from this collision and do hit Earth’s surface.

Muons travel through matter at nearly the speed of light. But as they travel through denser objects, they lose energy and decay. So, by calculating the number of muons travelling through various parts underground, researchers can paint a picture of an object’s density.

But for this method to work, the structure and the surrounding soil need to have at least a 5% difference in density, according to the study.

The researchers placed muon detectors about 33 feet (10 m) inside the mysterious structure and took measurements for two months. They found that the structure and surrounding soil do have enough of a density difference such that they could use this method to figure out the structure’s 3D shape.

The researchers don’t think the structure is an underground water tank, even though many historical sources refer to it as such. Rather, it might have been used for water storage in the 17th and 18th centuries, according to the statement.

“It seems very strange to me to interpret this building as a water tank,” co-author Natalia Polukhina, a physicist at the MISIS National University of Science and Technology, said in the statement. In the same fortress, scientists have identified another underground structure that really is a tank and is rectangular, she said. What’s more, during construction, the structure wasn’t buried but on the surface and was erected on the highest point of the fortress.

“What is the sense to put the tank on the surface, and even on the highest mountain?” she asked. “Currently, there are more questions than answers.”

This study wasn’t about making a new discovery but rather confirming that the method would reveal what the structure looked like. Next, the researchers hope to conduct an even more detailed analysis to create a full 3D image of the building, ultimately helping them to understand its purpose.

“The technique is very nice,” said Christopher Morris, a fellow of the Los Alamos National Laboratory who was not a part of the study. But “the only access [to the structure] seems to be from the void in the centre.” So they can only reconstruct it using data taken from a limited point of view, he added.

“I believe it is possible to reconstruct the buried structure,” if the group implements more detectors and gathers better data, Morris told Live Science. But “I do not know if this can reveal whether the structure is a church.”