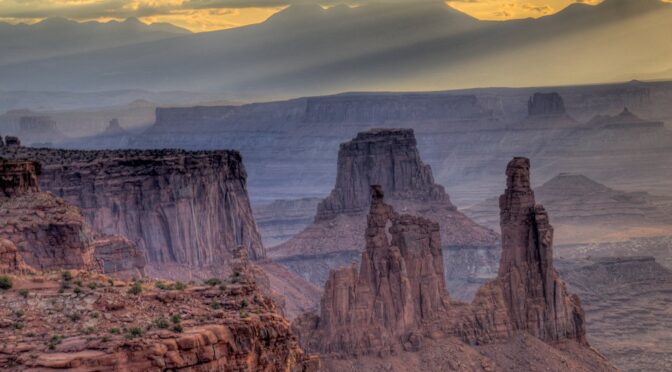 A 300-million-year-old fossil discovered deep in Canyonlands National Park in Utah could belong to an entirely new species, reports Amy Joi O’Donoghue for the Deseret News.

The fossilized critter is an amniote—a land-dwelling vertebrate that lays eggs— and has four legs. It’s most likely an ancient ancestor of reptiles or mammals, though more testing is needed before scientists can definitively label it as a new species, reports Sherry Liang for CNN.

“It’s roughly the size of an iguana and (the fossil) preserves at least the vertebrae, top of the skull, and some of the shoulder girdle and forelimb,” Adam Marsh, the lead palaeontologist at Petrified Forest National Park, tells Mark Price for the Sacramento Bee.

Around a year ago, a Canyonlands park ranger stumbled across the fossil and reported it to the park. Then, scientists from the Natural History Museum of Utah, Petrified Forest National Park and the University of Southern California teamed up to dig into this discovery.

They filed for a research permit and excavated the fossil last month, reports CNN.

“This is cool because it’s 50 million years older than the oldest dinosaur fossil,” Marsh tells the Deseret. “So it’s kind of cool that it’s from a period in Earth’s history where we just don’t have a lot of fossils from in North America especially.”

During the Pennsylvanian era, plants started to colonize dry land by way of more evolved seeds; animals did so through the evolution of the amniotic egg, in which the embryo develops inside a shell, like with birds and reptiles.

In the Permian, the planet’s continents started to squish together to form the supercontinent Pangea, and the era ended with the largest mass extinction in Earth’s history.

“It’s a phenomenal specimen. You do not see something like that very often, so it’s really significant for that in itself,” Marsh tells CNN. “But what it indicates is that there’s probably more fossils out there, especially at Canyonlands, in this really important time interval.”

Adding to the excitement, Adam Huttenlocker, a biologist at the University of Southern California, tells CNN that finding fossils of aquatic creatures is common at Canyonlands, but this is the first time he’s heard of the discovery of a land-dwelling vertebrate in the park.

“It really goes to show what kind of fossil resources are hidden in our national parks waiting to be discovered and shared with the public,” Marsh tells the Sacramento Bee.