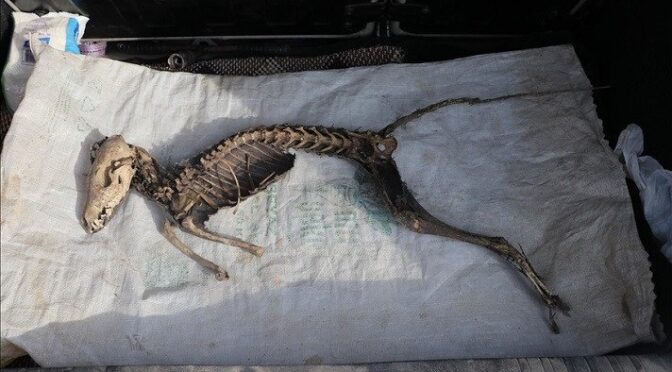 Digging in the yard of an old spinning factory in the eastern province of Iğdır last week, some workers discovered an animal skeleton of an unknown species.

The skeleton, which remained intact under the garden, is about 1 meter (3.3 feet) tall and has the teeth of a predator.

After the workers noticed that some of the tissue attached to the skeleton had yet not deteriorated, they reported their discovery to the academics at Iğdır University’s Biodiversity Application and Research Center.

The academics came to the area where the excavation was made and took the skeleton to the university. They will conduct research to determine the species of the animal skeleton at the university.

Belkıs Muca Yiğit, a lecturer at Iğdır University, told Anadolu Agency (AA) that they will try to find out the species of the animal after the examination.

“Then we will ensure that this skeleton is preserved in a museum,” Yiğit added.

Yusuf Kıtay, the operating officer of the excavation, said the workers found the animal skeleton while they were working in an area that has not been used for the last 30-40 years.

The shape of the skeleton caught the workers’ attention and they reported the situation to the authorities, Kıtay said, adding: “We especially noticed that its hindlimbs are long.

We informed the authorities that it may be an interesting species as its feet do not have hooves but claws, and it also has sharp teeth.”

“The research will be conducted, we are also curious. I hope something interesting will come out and be useful to science,” he added.