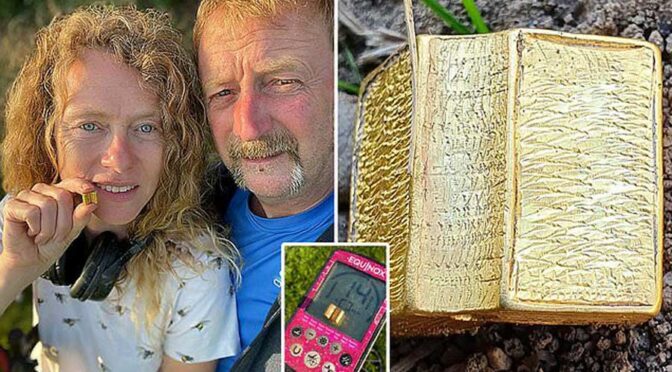 A metal detectorist discovered a little gold bible that had formerly belonged to a mediaeval aristocracy or royal. Buffy Bailey, an NHS nurse from Lancaster, came upon the book while searching for farmland near York with her husband Ian.

The 600-year-old object, which is just 0.5in (1.5cm) long, could be worth more than £100,000, Mrs Bailey said. An expert described it as an “exceptionally unique” artefact that would have originally been owned by someone “incredibly wealthy”.

Mrs Bailey, 48, said she and her husband chose York for detecting because they “knew it had a lot of history”.

With permission from the landowner, Mrs Bailey said she got a signal straight away.

“I dug down five inches and it was just there – I still didn’t believe it was anything special.”

It was only when she cleaned the item she realised she had found something special and not a charm from a gift shop.

“It was so heavy and shiny – just absolutely beautiful,” she said.

It is engraved with images of St Leonard and St Margaret, patron saints of childbirth, and could have been an object used for protection during pregnancy and childbirth.

It was found on land near property once owned by Richard III (1483 to 1485) and it is speculated that it could have been owned by a female relative of his or of his wife Anne Neville.

It has been compared to the Middleham Jewel, a gold pendant set with a blue sapphire, found at Middleham Castle, about 40 miles (64km) away, also once owned by Richard III and the Neville family.

“The artwork is clearly iconographic and bears a close resemblance to the Middleham Jewel – there is every possibility that it was made by the same artist.”

“Whoever had it commissioned must have been incredibly wealthy,” Mrs Bailey said.

The Yorkshire Museum, in York, is assessing the item before an auctioneer sets a valuation. At that point, the museum may decide to buy the item.