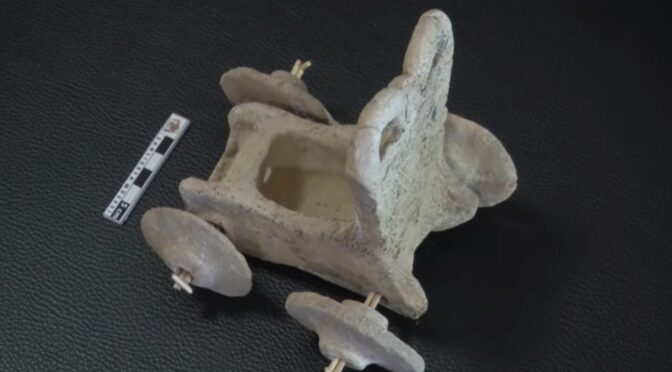 World’s Oldest Toy Car – Could This 5,000-Year-Old Discovery Be The Earliest Evidence Of The Wheel?

Many gearheads grew up playing with toy cars. Loyalties to Hot Wheels or Matchbox were as divisive as those between Ford and Chevy are today.

But kids have been fascinated by wheels since long before these companies—or even the car itself—existed.

An archeological dig in Turkey has revealed that our fascination with toy wheels goes back at least 5,000 years, reports the International Business Times.

A toy chariot dating back 5,000 years – which archaeologists believe may be the world’s oldest ‘toy car’ – has been discovered in Turkey.

The little chair on wheels, made from earthenware, was found during an excavation of the ancient city of Sogmatar, in the south-east of the country.

Sogmatar is believed to have been the home of Moses when he had run away from the Pharaoh.

Digs in the city have uncovered a number of tombs, including the child’s grave the mini-chariot was found, which have provided a fascinating insight into how ancient civilizations lived.

In total, 45 tombs have been opened, including three that have remained untouched since the Roman era.

A 4,000-year-old baby’s rattle dug up in the city of Kultepe in the central Anatolian province of Kayseri in 2014 was at that time hailed as the world’s oldest toy.

Sogmatar Excavation Head and Sanliurfa Museum Manager Celal Uludag said that Sogmatar was one of the most important excavations in the area.

He added: ‘The excavation in this area continues with the permission of the ministry. In the necropolis part, in a tomb room, we found a toy carriage which belongs to the Bronze Age and believed to have been made for the children of kings or the leaders.

‘This finding is very important for us as shows the aesthetic and cultural understanding of the period.

‘The item will be exhibited in the biggest museum complex of Turkey, the Sanliurfa Archaeology Museum. We believe that we are going to find even more important things in the excavation.’