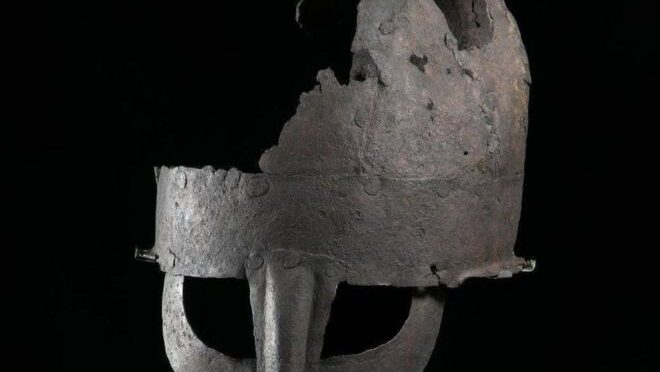 Yarm Viking helmet ‘first’ to be unearthed in Britain

According to new research, a Viking helmet discovered at Teesside is the first ever to be found in Britain. In the 1950s, in Chapel Yard, Yarm, a corroded helmet was unearthed by workmen digging trenches for new sewerage pipes.

The ‘Viking helmet’, as it is known locally, has been on loan to Preston Park Museum from Yarm Town Council for a number of decades. A research project, led by Dr. Chris Caple, has now discovered that the helmet is the first ever found in Britain.

It is also only the second nearly complete Viking helmet found in the world. The unusual artifact has never previously been researched and the age of the helmet had caused much debate.

In recent years, Dr. Caple, Emeritus Reader at Durham University, and his colleagues have discovered new information about the damaged helmet.

They used evidence from recent archaeological discoveries as well as analysis of the metal and corrosion to identifying that it is an Anglo-Scandinavian helmet made in the 10 century in northern England.

Dr. Caple said it was a “challenging project” as the thin iron sheet is now very susceptible to corrosion and has to be kept in very dry conditions.

He said: “Our analysis showed that it was initially preserved in waterlogged conditions, only later becoming damaged and starting to corrode. Fortunately, it was discovered before it corroded away completely.

“Although there are half a dozen early medieval helmets from Britain, the Sutton Hoo, and Coppergate helmets being the most famous, this is the first Anglo-Scandinavian (Viking) helmet from Britain.

“Whilst the Saxon helmets were often highly decorated and were worn by warrior leaders, as many symbols of authority as helmets, by the 10 century we can now envisage that most professional warriors had helmets like the Yarm Helmet.

“They were simply manufactured, well designed to protect the wearer (rivets flush with the surface so they did not catch bladed weapons) but no longer decorated.

“Together with a mail hauberk (shirt of chain mail), a helmet was essential personal protective equipment for a warrior. We see almost all the combatants in the 11 century Bayeux Tapestry wearing helmets and hauberks.”

Dr. Caple said that the only other near-complete Viking helmet is from Gjermundbu in Norway.

He said: “They do not normally survive because by the 10th century both Anglo-Scandinavian and Saxons were Christian and no longer buried objects in graves.

“This helmet, like the Coppergate helmet appears to have been hidden in a pit.”

Alan Gallafant, Chairman of Yarm Town Council, said: “Yarm Town Council are delighted that the provenance of this important historic helmet has been confirmed, thanks to the work carried out by Dr. Chris Caple and Durham University.

“Yarm Town Council welcomes the launch of this exciting development on Yarm’s history.”

The Yarm Helmet has been on permanent display at Preston Park Museum since 2012, where its condition is closely monitored and it continues to be one of the star objects on display.

Councillor Jim Beall, Stockton-on-Tees Borough Council’s Cabinet Member for Health, Leisure, and Culture, added: “It’s very exciting to have confirmation that the Yarm Helmet on display at Preston Park Museum is a very rare example of a Viking helmet and the first to be found in Britain.

“The museum is open to the public once again and it is great to welcome visitors to see this fascinating piece of history.”