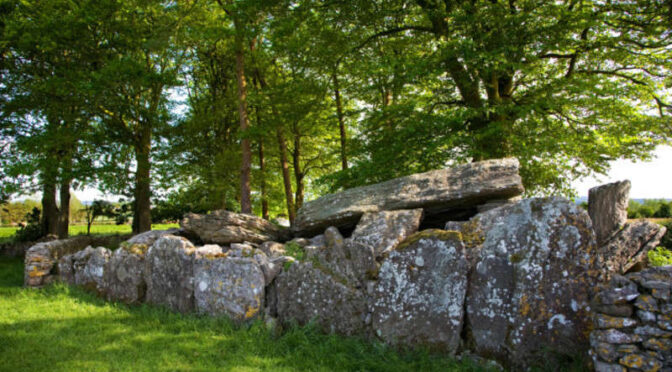 The tomb, which dates back to the Neolithic period before the start of the Bronze Age, appears to have collapsed in late 2021, with photos showing the capstone having fallen in. The tomb itself is located on farmland in Shankill and is known as the Carrickgollogan wedge tomb.

Andrew Bambrick, who runs a heritage conservation community, says that the capstone appears had fallen in between the two supporting stones and that it was sad to see it like this.

Photos taken of the monument in early 2021 show it surrounded by fencing and overgrown with brambles. In more recent photos, there are fewer brambles surrounding the tomb, but the capstone has collapsed inwards.

Bambrick says that while wedge tombs have collapsed in the past, it is usually due to factors like tree roots displacing the tomb and over long periods of time, erosion.

Bambrick says that he has reported the collapse to the National Monument Service, but had yet to receive a response.

However, the Department of Heritage said that the National Monuments Service was made aware of the collapse and that they plan on investigating further.

“The National Monuments Service was recently made aware of an apparent collapse of a capstone at the monument and will be investigating the matter,” said a spokesperson for the Department.

The wedge tomb is included within the most recent Record of Protected Structures (RPS) published by Dun Laoghaire – Rathdown County Council.

While there is awareness of large scale monuments, like Newgrange, Bambrick says that there needs to be more done to raise awareness of smaller, local heritage sites like the Carrickgollogan Dolmen.

He says greater awareness of these historical sites will lead to greater preservation efforts and called for local community groups to be set up to look after dolmens.

Bambrick said that while there were laws in place to protect historical sites like dolmens, there needed to be further efforts to investigate and enforce these protection laws.

He says that a separate organisation specifically to tackle monument vandalism needed to be set up by the Government.

The National Monuments Service is responsible for archaeological matters arising at larger monuments in the care of the State, as well as carrying out surveys on areas that may have historical monuments.

The body also provides advice to planning authorities on development proposals, like development plans, around the impacts they may have on historical sites.

Wedge tombs were the last tombs to be built during the Neolithic period, acting as burial grounds. All wedge tombs in the country are protected under the National Monument Service.

Well-known wedge tombs include the Labbacallee wedge tomb near Glanworth in Co Cork. It is noted as the largest in Ireland and dates back to 2300 BC.