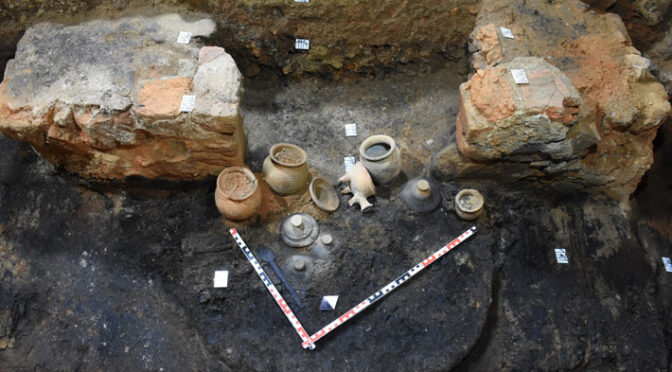 Archaeologists made an unusual discovery while excavating the ruins of a medieval house in the town of Nový Jičín in the Moravian-Silesian region – a well-preserved kitchen that likely dates back to the early 15th century.

The medieval kitchen, containing a brick oven, hearth, ceramic dishes and even a wooden cooking spoon, was uncovered by archaeologists during the ongoing excavation of a wooden house from the Middle Ages in the town of Nový Jičín.

Pavel Stabrava from the local Novojičín Museum, says that the find was made as archaeologists were excavating the underground segments of a house that stands near the northern side of the historic centre’s town walls.

“This was a log house built on a stone foundation. Given the surrounding evidence, including the items that we found inside, we have been able to date it roughly to the period of the early 15th century.”

Based on its location, Mr Stabrava believes that the house would most likely have belonged to a burgher family, a social class equivalent to the medieval bourgeoisie.

“Since the house was located near the town walls, this would have been a less wealthy burgher family. The richest burghers would have lived in so-called ‘beer court’ houses around the town square.”

Most likely founded in the 1300s by the Lords of Kravaře, Nový (New) Jičín seems to have gradually evolved from an earlier settlement around the castle of Starý (Old) Jičín which protected the nearby Amber Road that ran from Poland.

František Kolář from the National Heritage Institute, which took part in the dig, says that the town would probably have been largely made up of wooden houses, but admits that not much is known about the medieval settlement.

“This is because there haven’t been many archaeological excavations in the historical centre of the city. This is one of the first that has been made and we hope that we will be able to continue with excavations as the historic houses in the city get renovated.”

The medieval kitchenware inside the house was found in perfect condition, with the unbroken ceramic pots still containing their original lids. It seems that the items had just been washed and left to dry on the stone hearth.

Based on the evident burn marks found within the excavated house and on the surrounding historical sources, Mr Kolář believes that the items were found in this state because the inhabitants may have been forced to abandon the house in a rush.

“The working hypothesis is that the house was destroyed during the conquest of the city by the Hussites in 1427, when Hussite forces campaigned in Moravia and Silesia. Several independent historical sources mention the siege and conquest of the town, including the massacre of some of its citizens.”

The artefacts are now in the process of conservation, after which they will be stored in the depositories of the Novojičín Museum.

Pavel Stabrava hopes that further planned excavations around the exterior of the house will reveal more about the medieval town and its inhabitants.