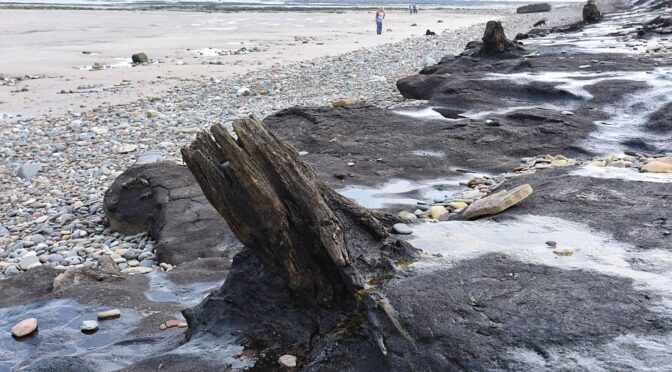 7,000-Year-Old Forest and Footprints Uncovered in the Atlantis of Britain

Ancient footprints, as well as prehistoric tree stumps and logs, have become visible along a 200-meter stretch of a coastline at Low Hauxley near Amble, Northumberland, in what is believed to be Doggerland, the Atlantis of Britain.

The Daily Mail reports that the forest existed in the late Mesolithic period. It began to form around 5,300 BC, and it was covered by the ocean three centuries later.

The studies proved that at the time, when the ancient forest existed, the sea level was much lower. It was a period when Britain had recently separated from the land of what is currently Denmark.

The forest consisted mostly of hazel, alder, and oak trees. Researchers believe the forest was part of Doggerland, an ancient stretch of land, which connected the UK and Europe.

Located in the North Sea, Doggerland is believed to have once measured approximately 100,000 square miles (258998 square kilometres). However, the end of the Ice Age saw a great rise in the sea level and an increase in storms and flooding in the region, causing Doggerland to gradually shrink.

Doggerland sometimes called the Stone Age Atlantis of Britain or the prehistoric Garden of Eden, is an area archaeologists have been waiting to rediscover. Finally, modern technology has reached a level in which their dreams may become a reality.

Doggerland is thought to have been first inhabited around 10,000 BC, and innovative technology is expected to aid a new study in glimpsing what life was like for the prehistoric humans living in the region before the catastrophic floods covered the territory sometime between 8000 – 6000 BC.

The latest research was made by a group of archaeologists and volunteers led by a team from Archaeological Research Services Ltd, which previously performed some other projects related to the Northumberland.

The works were possible due to the lower level of water. The major excavations involved a total of 700 people and uncovered part of an Iron Age site dating from around 300 BC near Druidge Bay.

Waddington maintains that his team also discovered evidence of humans living nearby. They found footprints of adults and children. Due to the results of the analysis of the footprints, it is believed that they wore leather shoes.  Animal footprints of wild boar, brown bears and red deer also had been found.

The remains of the forest of Doggerland do not belong to the oldest known forest. The oldest fossilized forest was discovered by a team from Binghamton University in the town of Gilboa in upstate New York.

The Gilboa area has been known as a tree fossil location since the late 19th century. However, the first researchers arrived there in the 1920s.

According to the article published in 2012 by William Stein, associate professor of biological sciences at Binghamton, the fossils discovered in this area are between 370 to 380 million years old.