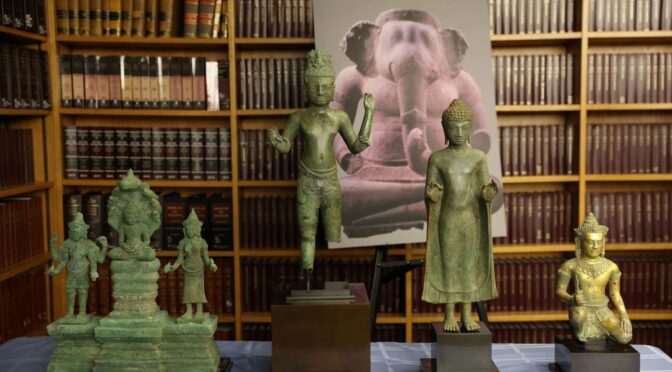 The United States will return to Cambodia 30 looted antiquities, including bronze and stone statues of Buddhist and Hindu deities carved more than 1,000 years ago, U.S. officials said on Monday.

The Southeast Asian country’s archaeological sites – including Koh Ker, the capital of the ancient Khmer empire – suffered widespread looting in civil conflicts between the 1960s and 1990s.

Cambodia’s government has since sought to repatriate stolen antiquities sold on the international market.

Damian Williams, the top federal prosecutor in Manhattan, said the items being returned were sold to Western buyers by Douglas Latchford, a Bangkok dealer who created fake documents to conceal that the items had been looted and smuggled.

Williams said the antiquities, including a 10th-century sandstone statue depicting the Hindu god of war Skanda riding on a peacock, were voluntarily relinquished by U.S. museums and private collectors after his office filed civil forfeiture claims.

“These statues and artefacts… are of extraordinary cultural value to the Cambodian people,” Williams said at a ceremony in Manhattan announcing the return of the antiquities.

U.S. prosecutors in 2019 charged Latchford, a dual citizen of Thailand and the United Kingdom, with wire fraud and smuggling over the alleged looting. He died in Thailand in 2020.

The antiquities will be displayed at the National Museum of Cambodia in Phnom Penh, Cambodia’s U.S. ambassador Keo Chhea told Reuters at the ceremony.

In 2014, federal prosecutors returned the Duryodhana, a looted 10th-century sandstone sculpture, to Cambodia after settling with auction house Sotheby’s Inc, which had acquired it.