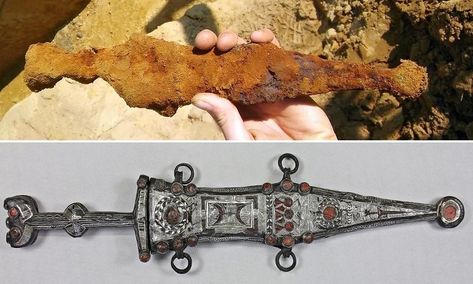 Nico Calman actually had a particularly good internship. During his time in Germany last year, with the Westphalia Department of Protection & Field Monuments, 19-year-old Calman discovered a 2,000-year-old silver dagger that may have helped the Romans battle a Germanic tribe in the 1st century A.D.

However when he found it was nothing more than a lumpy, rusty clump that was noted to look like a “chicken tender”.

It took nine months of careful restoration work for the dagger’s true beauty to be revealed.

The restored dagger and sheath is a night and day difference between how it looked when it was first unearthed.

Likely used in battles against the Germanic tribes in the first century AD,  It was an extremely rare find for the team of archaeologists, and one made even more special for the well-preserved state in which the dagger was found.

“The discovery of the dagger was emotional. We were lost for words,” Bettina Tremmel, an archaeologist working for the Westphalie Department told Live Science.

“Imagine: Though thousands of Roman soldiers were stationed in Haltern over almost 15 years or more, there are only a few finds of weapons, especially complete and intact ones.”

The dagger was corroded to the point of being unrecognizable when Nico Calman, the 19-year-old man on work-study unearthed it and the remains of a decorated leather belt from the grave of a soldier.

But after a rigorous restoration effort that lasted nine months, conservators in Germany unveiled the ornate 13-inch-long weapon and its bejeweled sheath underneath the grime this week.

The weapon likely belonged to a legionary or auxiliary infantryman or a centurion officer in the Roman army, Tremmel says. But why the weapon was buried with its owner remains a mystery, she says, explaining that “it was not the normal practice for Roman soldiers to be buried with their military equipment.”

Located at the edge of the Roman empire, Haltern am See was home to a large military camp during the Augustan period (27 BC to AD 14), where three legions of soldiers, each consisting of some 5,000 men, were slain by Germanic tribes. Roman fighters killed during the battles were buried at a cemetery nearby.

Despite archaeological digs taking place at the site for nearly 200 years, a weapon as sophisticated and well-preserved as the dagger has never before been found.

The newly restored dagger will go on view in Haltern’s Roman history museum beginning in 2022.