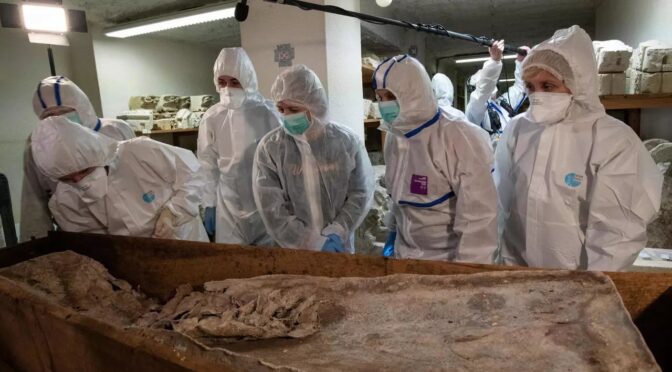 The AFP reports that researchers are examining human remains recovered from a tomb discovered in late 2019 in the basement of the Aquitaine Museum, which is located in southwestern France.

In the sixteenth century, the building housed a convent where the remains of philosopher Michel de Montaigne, who served as mayor of Bordeaux from 1581 to 1585, may have come to rest after his body was moved several times following his death in 1592.

The Musee d’Aquitaine in the southwestern city of Bordeaux had in November launched work to examine the remains in the tomb a basement of the museum, which occupies the premises of a convent where Montaigne, famed for his lofty but highly readable “Essays”, was buried.

The bones found are those of a “single individual. It is an adult and it is probably a man,” Helene Reveillas, an archaeo-anthropologist for the Bordeaux region, told reporters.

“We have elements which do not go against the idea that this is de Montaigne. But we also have nothing which allows us to affirm it with certainty”, she added.

“The mystery remains,” she said.

Montaigne was one of the city’s most famous sons and served as its mayor from 1581 to 1585. Speculation that his remains are housed already within a museum in Bordeaux had caused huge excitement last year.

The opening of the tomb last year revealed a wooden coffin with the word “Montaigne” written in large brown letters.

The lead coffin was opened this week, revealing “a well-preserved skeleton” and a skull “with almost all of its teeth” as well as the remains of tissue, pollens and insects, according to the archaeologist.

Laboratory research, including using carbon 14 dating, will now be carried out by about twenty scientists.

They will particularly be on the lookout for evidence of the kidney stones from which the writer was known to have suffered.

Reveillas added: “We know that his heart was removed after his death” at the request of his widow, noting that “operation leaves its traces”.

Other techniques set to be used in the follow-up include “facial reconstruction” and genealogical research on possible descendants, Reveillas said.

Results are expected next year.

There has long been confusion over the location of the remains of de Montaigne after the body was shifted between numerous sites after his death in 1592 at the age of 59.