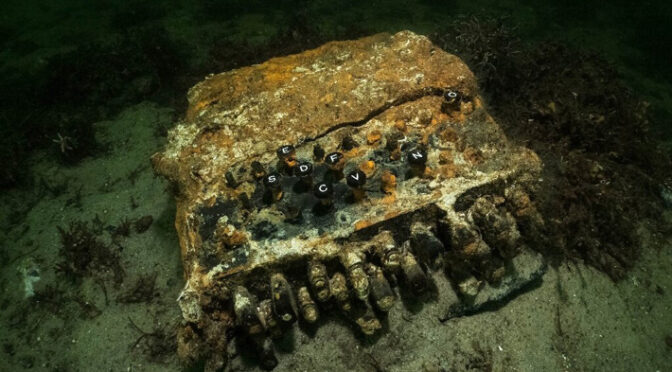 From the bottom of the Baltic Sea in Europe, three-quarters of a century after it was lost at the end of the Second World War, one of the most famous puzzles on the planet has been recovered.

A mechanical encryption device that once confounded the Allies while allowing Adolf Hitler’s Nazis to make battle plans in secret, German divers say they have dredged up a long-lost Enigma machine.

The typewriter-like machine was found on the seafloor of Gelting Bay in northeast Germany, where divers were working to collect old fishing nets on behalf of the World Wildlife Federation.

It’s believed the Nazis tossed the device overboard in an attempt to destroy it in the final days of the war, as part of an effort to keep German technology out of the Allies’ hands.

Divers initially thought the object was an old typewriter, but underwater archaeologist Florian Huber says he recognized it after it was brought up to the surface.

“I’ve made many exciting and strange discoveries in the past 20 years,” he told Reuters. “But I never dreamed that we would one day find one of the legendary Enigma machines.”

The Enigma machine was essentially an encrypted typewriter that allowed the Germans to send and receive messages without fear of them being intercepted and decoded by the enemy.

The Nazis used the machines to coordinate their war efforts for years, thanks to a shifting encryption process that would change every 24 hours.

Legendary mathematician Alan Turing is widely credited with finally cracking the code in 1941, which allowed the Allies to spy on German communications in the latter days of the war. The breakthrough came after Britain seized an Enigma machine from a captured German sub.

The codebreakers’ work is thought to have helped end the war and save thousands of lives. It also inspired the Oscar-nominated film The Imitation Game in 2014.

Huber says the Enigma machine found in Gelting Bay was likely lost in May 1945, around the time that the Germans surrendered.

German forces were ordered to sink approximately 50 of their own submarines in Gelting Bay at the end of the war, in an effort to prevent the subs from being captured. Crews were also specifically instructed to destroy the Enigma machines on board.

“We suspect our Enigma went overboard in the course of the event,” said Huber, who works for an underwater research firm called Submarines.

The divers have decided to donate the device to a museum where it can be restored and put on display.

Surviving Enigma machines are rare in 2020, although examples can be found at museums scattered across the world, including Canada. The restoration process for the new discovery is expected to take about a year.