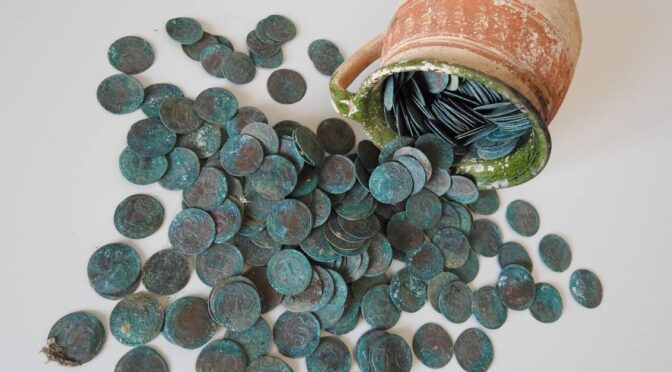 Under the floor of a church in the town of Obišovce, near Košice, eastern Slovakia, a cache of 500 early 18th century coins has been uncovered. The trove of coins had been stashed in a ceramic mug covered with a slab or stone.

It was found in the foundations of the Renaissance church which was demolished in the 19th century and the current church built over it.

When the floor of the church was demolished, the foundations were built. Archeologists explored the structural remains and came across the hoard that had been stashed under the original stone floor near the western entrance.

The coins in what was then Upper Hungary are mostly salary plates issued by the many mines. Copper, iron, silver, and gems had been mined in the east Slovakian fields since the 9th-century arrival of the Hungarian tribes. In the 15th century, the five main mining towns including Košice had united to promote their interests.

They had mints that produced coinage and salary plates with which the miners were paid. The hoard also includes silver coins, believed to have been wrapped separately in a linen textile, and a few Polish coins. From the dates on the coins, the earliest the hoard could have been buried was 1702.

When the coins were cached, Slovakia was part of the Kingdom of Hungary ruled by the Catholic Habsburgs and under regular attack by the Ottoman Empire.

They allied with Transylvanian prince István Thököly in the failed Magnate conspiracy to overthrow Leopold I in 1670, and again with his son Imre Thököly in his anti-Habsburg rebellion in 1678.

Imre, allied with the Ottoman sultan, took control of territories in eastern and central Hungary, creating the short-lived Principality of Upper Hungary which largely conforms to the boundaries of Slovakia.

By 1685 he had managed to be defeated in battle by the Habsburgs and to piss off the Turks so the putative principality was no more. The Great Turkish War between the Ottoman Empire and the Holy League ended in 1699 with the Habsburgs in control of Hungary.

With the region mired in so much religious and political turmoil in the late 17th and early 18th century, hoarding and hiding coins doubtless seemed prudent.

The historic sources state that after the Thӧkӧly uprising was over, sometime between 1685 and 1687, a Catholic priest returned to Kysak parish. Obišovce at that time belonged to this parish.

The priest was a Pole, he was blind in one eye and sometime in the 1690s, he went blind completely. The church was under the administration of the Catholic church until 1705 when rebels plundered it and it was left as a ruin for three years. The Polish priest was expelled and he returned to Poland.