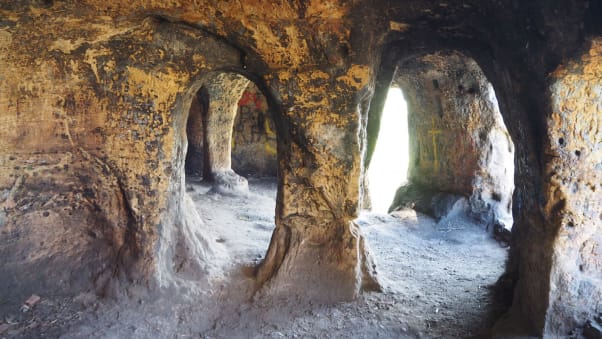 English cave may have ties to king-turned-saint and Viking invasion, archaeologists say

Archaeologists in England have identified a near-complete Anglo-Saxon cave house, which, they say, may once have been the home of a king who became a saint.

Thought to date from the early 9th century, the dwelling in the central English county of Derbyshire was discovered by a team from the Royal Agricultural University (RAU) and Wessex Archaeology, according to a news release published Wednesday.

The team carried out a detailed survey of the Anchor Church Caves in south Derbyshire, concluding that the caves probably date from the early medieval period rather than the 18th century as previously thought.

Edmund Simons, a research fellow at the RAU, told CNN the cave is a “small, intimate space” that is one of the oldest domestic interiors surviving in the UK.

While there are a few churches with intact interiors that date from a similar period, Simons said, “there’s nowhere else really where you can walk into somewhere where somebody ate and slept and prayed and lived.”

“It’s quite remarkable,” he added.

The researchers carried out a detailed study to reconstruct a house featuring three rooms, as well as a chapel.

A number of factors combined to date the dwelling to the early 9th century, Simons said. The caves are cut from soft sandstone rock and their narrow doorways and windows resemble Saxon architecture, while a rock-cut pillar is similar to one found in a nearby Saxon crypt.

The Anchor Church Caves are also linked by local folklore and a fragment of a 16th-century book to a saint. St. Hardulph has been identified as King Eardwulf, who ruled Northumbria until 806. He died around 830 and was buried five miles from the caves, in Breedon on the Hill in Leicestershire.

Around the time of his death, Viking raids on Britain, which started in the late 8th century, had grown in size. The Vikings arrived in the area and set up a winter camp in nearby Repton shortly after Hardulph’s death. As their Great Heathen Army slaughtered all the local religious figures, this suggests the cave house must date from before their arrival, Simons explained.

“All of these things fit together,” he added.

Hardulph would not have been a “beardy weirdy” who lived in the cave alone, said Simons, but a kind of living saint who had servants and disciples and visitors who would come to consult him. He is one of a number of deposed Saxon kings who lived out their years as monks or hermits as a way of keeping their status.

“A hermit is an important and holy person,” said Simons. “It’s an incredibly religious period.”

In the 18th century, the caves were modified by local landowner and aristocrat Robert Burdett, who added brickwork and window frames so that he could invite friends for dinner in the “cool and romantic cells” of the caves, according to the press release.

At the time there was a growing interest in Romanticism, an artistic and literary movement that made connections to the medieval period, as well as the picturesque aesthetic of rural England.

Burdett also widened the entrances to get tables, drinks and women in wide skirts into the cave, Simons said.

The analysis is part of a wider project involving more than 170 cave houses in the English Midlands, he said, adding that some date from a similar period and preliminary investigations suggest that a few could be even older than the Anchor Church caves.

“It is extraordinary that domestic buildings over 1200 years old survive in plain sight, unrecognised by historians, antiquarians and archaeologists,” Mark Horton, professor of archaeology at the RAU, said in the news release.

“We are confident that other examples are still to be discovered to give a unique perspective on Anglo Saxon England.”

The study is published in the Proceedings of the University of Bristol Speleological Society.