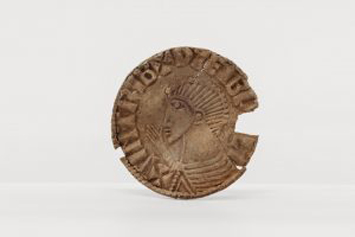 Viking-Era Coins Discovered on the Isle of Man

A metal detectorist who made another astonishing find last year uncovered a Viking era “piggybank” of silver coins on the Isle of Man. Former police officer Kath Giles discovered the 1,000-year-old fragments in a field in the north of the island.

Details of the 87 coins, which were found in April, were made public for the first time at a coroner’s hearing.

The coins were minted in England, Dublin, Germany and the Isle of Man.

Ms Giles previously made headlines when she discovered a collection of gold and silver Viking jewellery, which was declared treasure in February.

It would help increase understanding of the “complex Viking Age economy” in the area surrounding the Irish Sea, she added.

It is thought the silver pieces, which date from between AD 1000 and 1035, had been deliberately buried by the owner for safekeeping.

American coin specialist Kristin Bornholdt-Collins, who helped to identify the provenance and age of the pieces, said the hoard may have been used as a Viking Age “piggybank”, which would account for some of the older coins in the collection.

Dr Bornholdt-Collins said once buried the hoard may have been “added to overtime”, although most of the pieces were a “direct reflection” of what was circulating in and around the island at the time.

Other items found included 13 pieces of silver arm rings, which were also used as currency during the period.

The collection will be put on display at the Manx Museum in Douglas before being taken to London for valuation at a later date.

Under Manx law, finds of archaeological interest must be reported to Manx National Heritage and those legally declared treasures at an inquest become the property of the crown, with the finder rewarded.