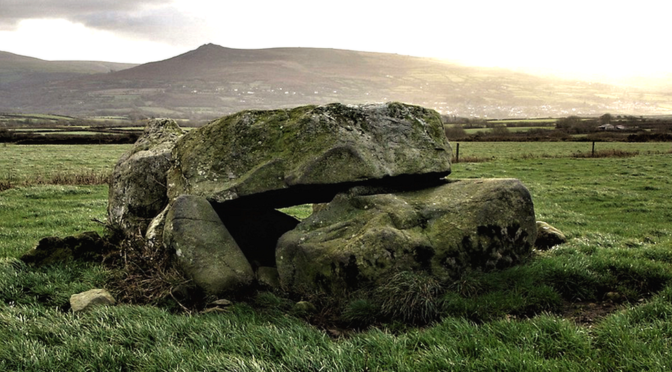 BBC News reports that dairy fat has been detected on pottery unearthed at the Trellyffaint Neolithic monument, a site in southwest Wales where two concentric earthen henges have been found.

Dairy farming could have been happening in Wales as early as 3,100BC, according to new research. Shards of decorated pottery taken from the Trellyffaint Neolithic monument near Newport, Pembrokeshire, were found to contain dairy fat residue. The residue could only originate from milk-based substances such as butter, cheese, or more probably yoghurt.

George Nash, of the Welsh Rock Art Organisation, said it was the earliest proof of dairy farming in Wales.

Project leader Dr Nash said Julie Dunne of the University of Bristol had detected the dairy fat residues from the inner surfaces of the pottery, as well as dating them with 94.5% accuracy to 3,100BC.

“It’s incredibly rare to find any archaeological remains such as bone and pottery in this part of Wales because of the soil’s acidity,” he said.

“So, we can’t say for certain that this is the earliest example of dairy farming, but it is the earliest that anyone has been able to prove, using new revolutionary direct dating methods.

“The discovery of this pottery is important because it is right on the cusp of when a new Neolithic ideology was taking hold.”

Dr Nash, who teaches at the University of Coimbra in Portugal, termed the period a “Neolithic package” that included animal husbandry, pottery making, food procurement and different ways of burying and venerating the dead.

It gradually replaced the hunting, fishing and gathering way of life which had typified the previous era.

They discovered two concentric henges along with other buried objects. The henges – two circular earthen banks – are roughly contemporary with Stonehenge, dating from the mid to latter part of the Neolithic period, between 3,000BC and 2,000BC.

However, Dr Nash said it is important to view the period as a continuum of social and ritual development rather than a single event.

“As the population grew throughout this period, communities had to diversify the way in which they sourced their food,” he explained.

“Initially, farming was a far riskier economy than hunting, fishing and gathering, as if you had one outbreak of disease – one crop failure – then you were prone to starvation and instability.

“It is probable that throughout the Neolithic period in western Britain, both natural resources and farming played equal roles in providing communities with the resources they needed.

“The pottery recovered from this excavation probably reveals something about the veneration of the earth and what it could provide, hence the offering of dairy products within a ritualised landscape”.

The survey discovered the main chamber was largely in a good state of preservation. However, at some point in the recent past, the enormous capstone covering the chamber had slipped off its supporting upright stones. Up to 75 engraved cupmarks – gouged circular indentations – and several intersecting lines were recorded on top of this stone.

The cupmarks, which feature on only a handful of Neolithic burial-ritual monuments in Wales, suggest the stone formed part of a new religious ideology where rock art represented the night sky and constellations.

Maybe a few hundred years later, the community using Trellyffaint made the decision to yet again change their worldview, which resulted in the construction of the two concentric henges a few yards north of the monument.

For this new set of monuments, offering dairy products rather than looking towards the night sky became the new way of veneration. The artefacts discovered will be presented to the National Museum of Wales in Cardiff for safekeeping, while the team’s research is due for publication in several international scientific journals.