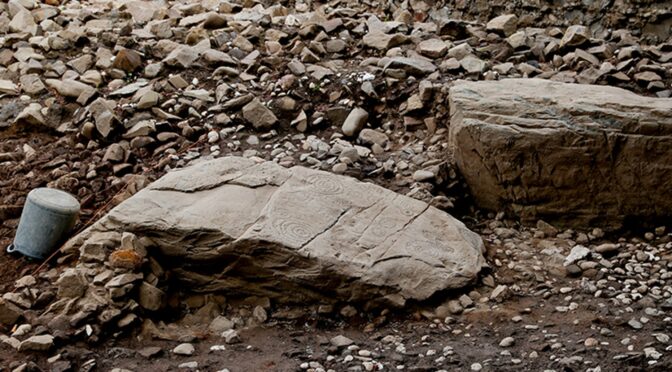 Incredible 5,500-year-old tomb discovery is ‘find of a lifetime’

It appears as if Meath is in the midst of a golden age of archaeological discovery after the unearthing of a 5,500-year-old megalithic passage tomb at Dowth Hall.

After last week’s incredible discovery of a previously uncharted henge site near Newgrange in Co Meath, another fascinating find nearby is shedding even more insight into ancient Ireland.

According to RTÉ News, a 5,500-year-old megalithic passage tomb has been revealed on the grounds of Dowth Hall, just down the road from the Newgrange monument. It is the most significant find of its type in Ireland in the past 50 years.

So far, two burial chambers have been discovered in what is the western section of the main passage tomb, buried by a massive stone cairn measuring 40 metres in diameter.

A series of six kerbstones have been found around the perimeter of the cairn, one of which is adorned with a number of well-preserved Neolithic carvings and drawings.

The discovery was made as part of a collaboration between the agritech firm Devenish and the University College Dublin School of Archaeology.

Speaking of its importance, Dr Clíodhna Ní Lionáin, who led the Devenish part of the dig, said: “For the archaeologists involved in this discovery, it is truly the find of a lifetime.”

Adding to this, Devenish’s executive chair Owen Brennan compared its decision to choose the site with those made by the tomb’s constructors thousands of years ago.

“From our archaeological research, it seems we made the same decision for the same reasons as a long line of our farming colleagues from the Neolithic, the Bronze Age, medieval and more recent times,” he said.

“The monuments here, created by some of Ireland’s first farmers, capture our imaginations and those of our visitors to the Devenish Lands of Dowth.”

The Brú na Bóinne World Heritage Site at the tomb’s location is now a real hotbed of archaeological activity, and with the recent henge discovery made after an intense heatwave, more major digs could be in the works in the region in the years ahead.