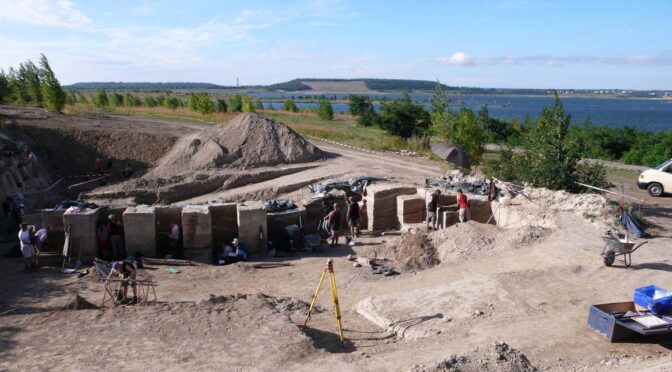 Neanderthals Were Altering the Landscape at Least 125,000 Years Ago, New Evidence Suggests

Researchers at an archaeological site in Germany may have discovered the earliest evidence of hominins, or early humans, transforming their surroundings, they said Wednesday.

Specifically, they identified a distinct footprint of Neanderthal activities near a large body of water in the region surrounding the Neumark-Nord site, a dig location in the Geisel Valley in Saxony-Anhalt, dating about 125,000 years ago, they said, in an article published Wednesday by Science Advances.

Based on their findings, activities that include hunting, animal processing, tool production and fire use may explain why the region’s forests were cleared during this period compared with vegetation surrounding other nearby lakes, according to the researchers.

The discovery “adds an important aspect to early human, including Neandertal, behaviour [as] it shows that humans were already a locally visible factor in shaping vegetation 125,000 years ago,” lead researcher Wil Roebroeks told UPI in an email.

“We might expect to find other examples of this, especially since Neandertals and their contemporaries were skilled in fire technology,” said Roebroeks, a professor of Palaeolithic archaeology at Leiden University in the Netherlands.

The findings may complicate scientists’ understanding of the Last Interglacial period, which began about 130,000 years ago and ended about 115,000 years ago, as the last in which the landscape was untouched by humans, according to the researchers.

The Last Interglacial period is seen as the last in which environmental and climate conditions most mirrored those of the present day.

Scientists are still trying to confirm how, when and to what degree Pleistocene hunter-gatherers impacted their surrounding environments, they said.

It is believed these impacts are likely small, however, given the low population densities in these communities, the researchers said.

To determine whether Neumark-Nord may contribute to the ongoing debate over how far back in time the environmental influence of humans can be observed, Roebroeks and his colleagues analyzed paleoenvironmental data, including pollen counts, and archaeological data at the site.

Neumark-Nord was abandoned by hominins, or early humans, when parts of the northern European plain were covered by ice sheets but re-inhabited at the beginning of the Last Interglacial period, earlier studies suggest.

The researchers compared the data with two other nearby locations that are also located in the eastern region of the Harz Mountains in Germany, they said.

While pollen composition and levels at these other sites indicate a closed, forested environment, pollen data at Neumark-Nord suggest more open vegetation, a pattern inconsistent with the rest of the region, the researchers said.

Combined with charcoal data and previous evidence of the presence of Neanderthals in the area, the findings suggest that early hominin hunter-gatherers left a lasting mark on the region’s environment, they said.

“With the quarry closed and the sites destroyed, our multidisciplinary team is still studying material from the excavations, such as the huge amount of remains of butchered animals,” Roebroeks said.

“The time period of 125,000 years ago is often used to provide reference information about the state of natural vegetation in the absence of human impact,” he said.