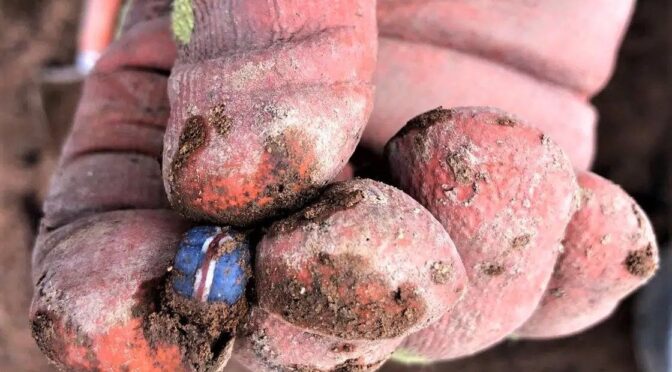 Archaeologists in Seyðisfjörður have excavated jewellery that dates from 940 – 1100, just after the initial settlement of Iceland. Notably, one of the beads found in the excavation even bears the colours of the Icelandic national flag.

Archaeological digs have been underway in Seyðisfjörður, a fishing village in the East Fjords of Iceland, since 2020. Due to the high slopes of the valley, Seyðisfjörður is subject to land slides, and local authorities plan to build defensive barriers to protect the village, which has suffered damage in recent years.

However, these same land slides have also preserved archaeological sites in the region particularly well.

Archaeologists have been called in to perform exploratory digs where the defensive barriers will be erected, and have found remarkably intact manmade structures and artefacts such as game pieces and pearls.

The most recent discoveries are centred around the farmstead where Bjólfur, a settler named in Landnámabók, is believed to have had his farmstead. Significant finds at this site have included the remains of a man, a horse, a spear, and a boat.

Archaeologists have been able to date the site with a fair amount of accuracy, given tephra layers from eruptions, and landslide layers.

The artefact that has generated the most interest by far has been a bead which coincidentally has the colours of the Icelandic flag: blue, white, and red.

Ragnheiður Traustadóttir, an archaeologist and director of the team, has stated to RÚV that the find has caused quite the stir on social media, even causing some to claim a more recent provenance.

However, Ragnheiður has stated that it is certainly from the period 940 – 1100, given that it was found under known tephra and land slide layers.

“It will be interesting to put this in context with the four mounds we dug up last year,” she said to RÚV.

“There is a unique opportunity to look at the history of Seyðisfjörður from the second half of the tenth century until the eleventh century.”

Some twenty archaeologists are currently at work excavating in Seyðisfjörður. The field season is expected to last through the middle of August, and continue next year.