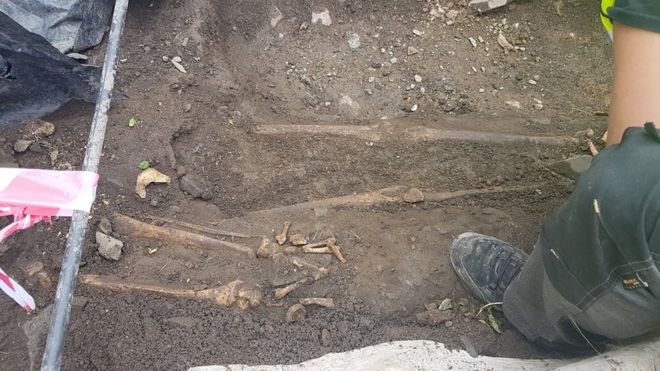 Among 14 skeletons uncovered in an ancient burial ground within meters of St Patrick’s grave, the remains of a young child and a teenager.

The medieval skeletons were Discovered beside Down Cathedral in Downpatrick, County Down, in August 2018.

Archaeologists first thought they had found the lost cemetery of Thirteenth-Century Benedictine monks.

But they have said the oldest skeleton is that of a five or 6-year-old child who died almost 1,000 years ago.

The most recent skeleton is that of a young woman, believed to be a late adolescent, buried between 1317 and 1429. Experts said she was suffering from severe tooth abscesses at the time of her death and believe she may have traveled to the on-site monastery in search of medicine or prayer.

A community dig was led by archaeologists from Queen’s University in Belfast, working with volunteers to prepare the ground for the erection of a replica high cross.

Visitors from around the world flocked to the area as the dig unfolded.

In the buried kitchen of a 13th century Benedictine Abbey, as well as a flint tool dating back to about 7,000 BC, ancient pottery and animal bones were also recovered. Also found were blackberry seeds, sloe pips, fish bones, and bread-making charred wheat grains.

Excavation director Brian Sloan said subsequent analysis, including radiocarbon dating of 3 of the skeletons, had uncovered a “rich picture of medieval life”.Although analysis of the skeletons is ongoing, he said evidence showed the young child had lived and died before the Anglo-Norman invasion of 1177 AD.

He said the young woman had lived sometime between 1317-1429 AD when the site was occupied by the Benedictine Abbey.

Mr. Sloan said the other archaeological finds had offered an insight into life in the abbey and a glimpse into an 8th Century Christian monastic site.”We can use this evidence to build up a picture of the diet and everyday activities of the monks who lived and prayed here,” he added.”

The large pottery shards have been painstakingly pieced together at Queen’s University Belfast giving an idea of the shape, size, and decoration of the vessels.”A rich environmental picture is being established through the processing of the soil samples taken during the excavation.”

Metalwork recovered from an ancient pit has also been analyzed and include fine copper alloy dress pins, a socketed arrowhead, a horseshoe, a pair of iron shears and a length of chain with a suspension hook still attached.

A number of items are now on display in the High Cross Gallery at Down County Museum in Downpatrick, in two new cases funded by the British Museum Trust, while research work continues on the collection of artifacts, dating from the Mesolithic (c. 7000 BC) period.

Mr. Sloan added: “This is fantastic as Downpatrick has almost been ignored from an archaeological and historical point of view.”It has got my blood flowing. I believe there is more to be found.”